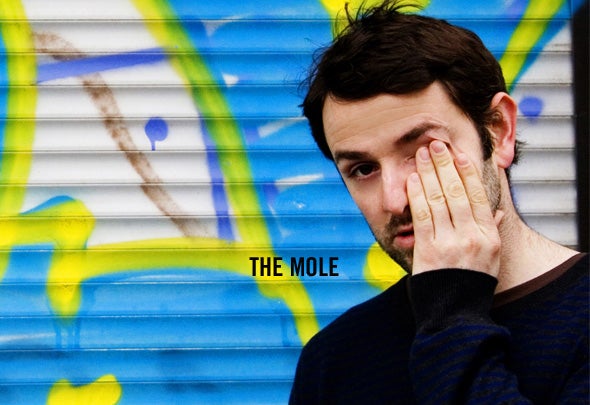 the mole Ever heard of Bobby Orr or the Rocket number 9? Neither had The Mole until he moved to Montreal from Canada’s West Coast. And now he loves them. Perhaps there is something magical in the humble success of these men that inspires. Who doesn’t love a reluctant hero? Dance music fans in Victoria and Vancouver in the 90s heard a lot of The Mole in his infancy. His mentors, believing he had a natural talent, pushed him from his DJ beginnings into music production. This natural talent was, in reality, mountains of hard work consummated in secret not unlike the rigorous discipline kung fu students undertake in those wonderful bamboo forests. For The Mole though this retreat took the form of long winters in the French and arguably the cultural capital of Canada, Montreal. Long, cold winters indeed. It was only natural that the city’s storied disco story would fit him well. Warm people and cold nights warming blood like so much sap in spring. The Mole is often reminded of his voyageur past (as an 18th generation Canadian he is very proud of his French and English roots) when navigating the graveyards of vinyl that abound in his hometown. What could make a black crack addict feel more at home in this cold climate? I tell you what: 7 years of residency at the Laika bar and numerous appearances at the MUTEK Festival. Enough about why The Mole has chosen to make his burrow in the storied city, let’s talk about the music. Urb magazine named him one of the ‘next 100’ in 2004. His live set at MUTEK 2004 was one of the top ten in the Village Voice Critics’ Poll 2004, followed by 2005’s collaboration with long time friend and band mate Mathew Jonson ‘Dirt Road and a Boat From Soundwave’ on Kompakt’s Speicher was received with critical acclaim. As were his releases that year on Philpot, Musique Risquée and Revolver. 2005 also saw the reunion of the Modern Deep Left Quartet on Wagon Repair, probably the greatest source of pride for the Molito to date. There is also what The Mole refers to as the ‘starchy root machine’. And with a little like that, it should spark some interest! Anyway, it is a performance in which a minimum of 5 turntables are all playing loops that are either manufactured or hand made. With this The Mole then manipulates them, in a traditional DJ sense, with some effects to bump it up (what he confesses is quite a psychedelic experience for him). And although he has, because of other projects had to put this endeavor on the back burner for a little while, he still gets questioned on when he will bring it back. ‘I’ve only ever don it in Montreal because I think the number of tables scares people and it is fairly experimental… though terribly techno as well’. With his 2006 ‘In my song/Acadian’ being signed to a Sven Vath mix and a part time collaboration with Paddy from Cobblestone Jazz as the ‘Smokin Posties’ releasing their first remix on itiswhatitis, things were heading in the right direction for The Mole. 2007 saw further standout releases on Wagon Repair and late in the year a relocation to Europe, where he’d spent much of the summer months touring. Now 2008 heralds even greater things as The Mole releases his debut album ‘As High As The Sky’ on Wagon Repair and prepares to tour around it across the globe. Plus there’s the release of singles for Prins Thomas Ful Pupp imprint and there’s plans afoot to create a diggers wet dream of a 7” label with fellow Canadian Koosh, code named Sticky Fingers. In some ways all this begs the question of ‘why Bobby Orr and Rocked Richard’. In the end The Mole insists that he’s ‘just a hockey player’. Wait that’s not right! He doesn’t even play hockey. In fact, he can barely skate! But he does love music with a humble and honest gratitude that can be heard throughout his work.