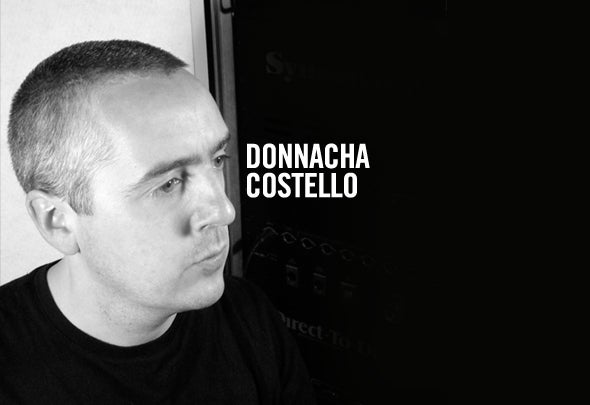 There are few artists these days who consistently succeed to focus their passions, talents and instincts into deliciously individual, melancholic, beautiful and timeless recordings. Irish born Donnacha Costello is mongst the highest ranks f such artists. There can be no question that Costello is in lectronic music for the long haul. Since his production debut in 1996, he has forged his very own brand of emotional and highly refined electronic music; timeless club music which has consistently found its way into the crates and playlists of house and techno’s biggest DJs. Releasing records since 1996, and founding his own label Minimise in 1999, Costello first came to wide-scale international attention with the albums ‚Growing Up In Public‘ and ‚Together Is The New Alone‘ on the legendary Force Inc and Mille Plateaux labels in 2000 and 2001 respectively. However, it was the release of his famed ‚Colorseries‘ in 2004 that brought him wider recognition and placed him firmly at the top of his field. This success was solidified in 2006 with the release of his now infamous 6x6=36 project on Minimise. 2007 brought another hit with ‚Black Bag Job‘, 2008 saw the iconic It Simply Is/Trust. In 2009, Costello expanded his business to encompass a new label, Look Long. So far, the label has released 4 records from Costello, to critical and commercial success. The bold outline of the year 2010 brought with it a new project in the form of his first ever longplayer with Poker Flat Recordings. ‚Before We Say Goodbye‘ is an exquisite work to say the least. Focusing on a rich blueprint, with echoes of Chicago House, Detroit Techno, and UK Ambient Techno flowing through its futuristic core, Donnacha explores further his love for deep, hypnotising grooves, rich synth themes and emotive harmonies. Known for his love of classic studio equipment, Costello combines the spontaneity and strong character of his older machines with the finesse of the computer to achieve a hybrid sound that transcends arguments concerning old school versus new school. Such concerns have become irrelevant to him as he pushes forward with the self confidence that 14 years of releasing records and performing all over the globe have brought him. One of Donnacha‘s main goals is simply to keep on producing music from the heart, and indeed to ensure that the quality is high, thus allowing listeners and buyers a good return. He has set out to communicate, to express himself, and establish emotional connections through music.