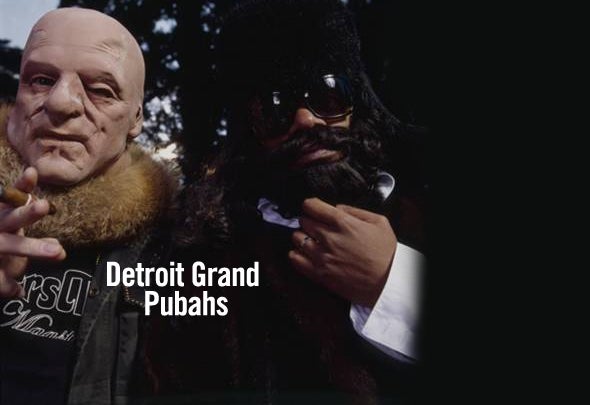 Originally founded by Mack Goudy Jr. (Paris The Black FU) and Andy Toth (Dr. Toefinger) in Detroit back in 1998, but since their album on Pokerflat (April 2004) the Detroit Grand Pubahs consist of Paris, his alter egos and the Mysterious Mr O: butcher extraordinaire. Of course it’s the usual story about hardship, high court banning orders, laser-firing buttocks and straightjackets. Few lead s(w)ingers these days can have a crowd eating out of their hands whilst wearing a giant nappy, beard and turban but somehow Paris The Black Fu’s Terrorist Diaper chic is the new couture look for spring 3007. If techno is Kraftwerk jamming with George Clinton in an elevator then the Pubahs have got Spike Milligan on drums, Richard Pryor on bass and the Barry White on vocals. But the Pubahs are no novelty act. There is method to the madness and bass in the badness. Its just that something went awry in the funk lab and Paris The Black FU just hasn’t been feeling himselves ever since. It’s all about personality (well split personalities) and a mission to put the fun(k) back into techno. For many the realm of a faceless façade, Paris sets out to engage the crowd and bring the party. And that’s what it was all about in the first place, wasn’t it? The teaming of Mack Goudy Jr. (aka Paris the Black Fu aka the Schizophrenic Brainchild of Funkno aka Dr. Bootygrabber) & The Mysterious Mr O was a natural disaster waiting to happen. Miraculously, the personalities of these two tweaked characters seemed to compliment each other perfectly and their uncontrollable infatuation with booty (butt, ass, gluteus maximus) instantly bonded them together. The original Pubahs started out on Brian Gillespie’s tiny indie ‘Throw’ label, releasing the underground club hit ‘Sandwiches’. When a Jive Electro A&R man, dutifully out buying records at a local strip club, heard it he immediately knew he had something special and prepared to unleash it on the world. Since then, they've scored a pop hit in a number of countries and an underground classic worldwide. They’ve also taken their live show to another level, with Paris donning multiple costumes and personalities and encouraging the crowd to participate in the funk. The Pubahs run their own label, Det.Ele.Funk (or to give it its full title ‘Detroit Electronic Funk’).