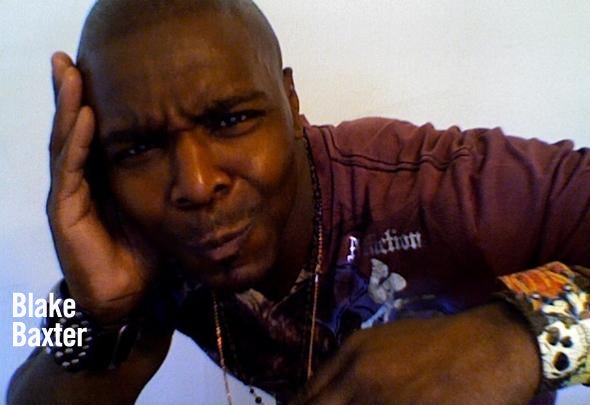 Blake Baxter nicknamed by the Detroit first wave posse Prince of Techno often referred as one of the creators of the Detroit electronic dance music scene Blake Baxter style of techno music is his innovation of techno music called tech house a fusion of Detroit style techno and Chicago style house music influence Blake Baxter started producing Tech house style productions in 1987. Baxter first began mixing records in the middle of the 1980s. Some of his first releases was recorded in Chicago on the label DJ International, which was later remixed and released in Detroit on the record label KMS Records, KMS-011. Also in Detroit He released music on the Underground Resistance label an EP 12 inch vinyl The Prince of Techno UR-06 in the late 1980s and early 1990s, and had several of his productions featured on the Techno: The New Dance Sound of Detroit compilation. Around 1989-92 he released three 12 inches records on Incognito Records. While touring in Germany in Berlin, he released One more time on Tresor records and "Brothers Gonna Work it Out on Logic records in Frankfurt a track based on Willie Hutch's 1973 eponymous release, which was later sampled by The Chemical Brothers. After returning to Detroit, he set up the labels Mix Records and Phat Joint and opens a record store in downtown Detroit called Save the Vinyl from 1992 to 1999 Blake Baxter a native of Detroit Michigan before artist from Detroit city got noticed worldwide for their electronic music sound As early as a teenager Blake Baxter was DJ/mixing all forms of dance music from Hip Hop and R&B, Reggae, dancehall, alternative rock to Dance music in the mid 80s Blake Baxter was a resident disc jockey at Majestic theater club in Detroit also working on his own productions in studios in Detroit and Chicago eventually Blake was signed to Chicago’s DJ international dance music record label at the time Blake was not a established artist and not from Chicago he was a kid in a candy store Blake loved the Chicago house music sound and was influenced by the Chicago house music scene As an artist Blake Baxter sound for DJ international was not traditional Chicago house music it was dark a combination of industrial sounds and acid house influences it was before the techno name sake and sound title was established in Detroit just before it’s recognition after a year of working in studios with DJ international Blake Baxter was introduced to Kevin Saunderson who at the time was starting up his own record label called KMS records soon after their introduction the label KMS records released an four tracks production by Blake Baxter on a EP vinyl 12 inch format produced by Blake Baxter this was Blake Baxter fist official release Mix Media Booking DJ Blake Baxter Mix Records The Sound Republic Poetry and Rhythm www.myspace.com/blakebaxter www.facebook.com/prinseoftechno www.soundcloud.com/blakebaxter www.youtube.com/mixmediavideo http://about.me/blakebaxter