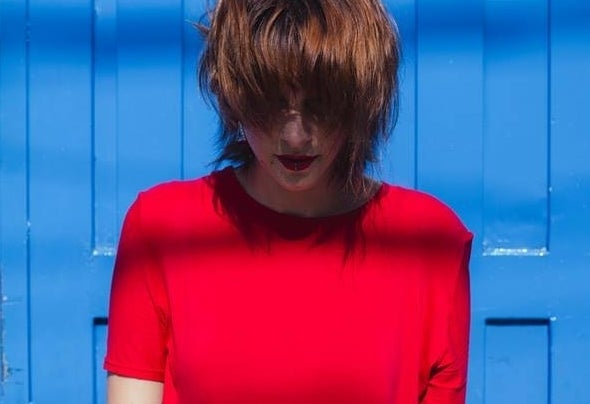 Magdalena, Colombian artist who grew up surrounded by music and arts, her grandfather Jorge Camargo Spolidore, was a big composer and musician and this has pass on through generations, her father gave her the first steps into piano and then she started to show her own curiosity for music. when she was 10 years old, became part of the school chorus, even being a really shy girl she developed singing skills and a deep love for "the stage". Always following underground and industrial sounds she founded a hard attraction for percussion what made her start playing drums with a punk band at the age of 15.A few years after got herself into electronic music and started "djing". With a few months of learning under the guide of Fabio Alzate, she was invited to a couple of tv shows and started djing at underground parties. Not too much time till she made people notice her, and became resident of "69" by "La Sala", resident of Cha Cha Club, one of the most important clubs in Latin America, finalist of the second edition of "Heineken Thirst" and winner of "Nokia Contest" what gave her the chance to play at "Nokia Trends" of 2005 (Moby, Darren Emerson and Ferry Corsten). With no management at all, just with her sound, her music and her technique, she became one of the most important djs of Colombia and she is recognized in South America, after playing at Rotofest, Chongon Parade, and more parties and festivals in Ecuador. Artists like John Creamer, Marco Bailey, Tonio Barrientos, Fabio B Energy and more, who have shared scene with her, have supported and have made really good comments about her set.She lives between singing and Djing, has made vocals for artists like Cates&Dpl (USA), Gulio Maddaloni (Italy), Alex E (Argentina), Cute Heels (Colombia), Electroboy (Colombia).The single "Magdalena" with Cates&Dpl appeared on the "Azuli presents..." by D. Ramirez. Lead vocals on Telequinetics (Colombian postpunk band), former of the experimental project "Alice in..." and now she is working on her first album as a solo artist (www.soundcoud.com/magdalena) Her mixes are a combination of techno, minimal and experimental and industrial sounds.