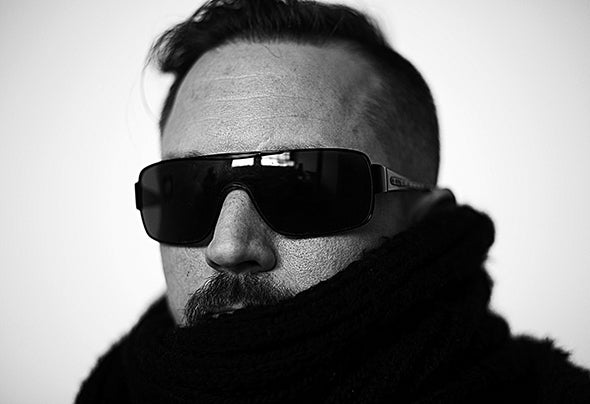 Within the techno genre, many claim to have been influenced by the now heavily commercialised hip hop movement. For Ben Long, one half of London’s infamous and influential Space DJ’z, this statement comes from within. Having grown up in the early 1980’s immersing himself totally in the lifestyle of breakdancing and graffiti, his attitudes towards hip hop, and the connections he sees between it and techno were forged, and his beliefs are those of someone who has followed both genres from the underground upwards. When commercialism finally set about popularising hip hop to the masses, Ben turned his focus towards the familiar beats and bass of techno to satisfy his love of electronic music. When Ben linked up with old friend Jamie Bissmire in 1988, the two urban Londoners had already been avid record collectors, and they began experimenting on turntables, and in the studio, and the Space DJ’z were born. As Jamie formed his Bandulu project , Ben continued to hone his skills, which were considerable even at that time, and in 1990 this was rewarded by his first gig, appearing as support DJ for Bandulu and The Orb at Brixton Academy. With Bandulu enjoying extensive success, Ben focused on producing the music he loved, dj’ing and working at the London based Infonet label. It was Infonet that was to be the platform for The Space DJ’z first release ‘Loose Change’ in 1994, then again in 1996 when the duo’s seminal and hugely successful ‘Return to Earth’ proved to be one of the years biggest techno records, and catapulted them into the frontline of the thriving British techno scene. With Bissmire still hard at work with Bandulu, Ben used his new found fame to develop his career by setting up his own record label Potential Recordingz. His releases on Potential proved to be massively popular, and soon Ben’s production and remixing skills were in demand from such heavyweight techno labels as Primate, Tortured, Advanced, Audio, Ground, Consumer Recreation and Pounding Grooves. He rightly takes pride in the fact that he also offered Potential as a springboard to other techno producers such as Umek, Ade Fenton and Chris McCormack, who have since become established artists in their own right, and with the label reaching it’s 23 rd release, it has become synonymous with the highest quality techno for over 8 years. During the late 1990’s and beyond, the Space DJ’z have continued to enjoy enormous success, from their ‘On Patrol’ album on Soma, to the staggering electronic mayhem of their AK-47 release on Ben’s own Potential. As dj’s, Ben Long and Jamie Bissmire have been performing individually, and as the Space DJ’z for over 12 years, regularly playing at techno clubs across every continent of the world, and in 2003 they released their first mix CD ‘The Last DJ’z on Earth’. Ben puts this longevity down to their total dedication to the art, and by “staying true to themselves and their beliefs. With the Space DJ’z, what you see is what you get”. As a solo artist, Ben’s dj schedule is busier than ever and his performances behind the decks undoubtedly reflect his hip hop roots, and it is clear that it is behind the turntables that he can truly express himself. As Ben himself says “I see the two as parallel musical forms with no constraints - techno is always changing and always moving, and hip hop is exactly the same”. It is because of this inventive and innovative attitude to his profession that Ben set up his Ergonomix label, an imprint influenced by Jeff Mills ‘Cycle 30’ release, solely devoted to locked grooves. In 2008, Ben celebrates his fifteenth year as both a DJ and recording artist. His love of electronic music remains as strong as ever, and his enthusiasm undiminished. With a stack of new music ready to be released, and worldwide bookings well into the year already confirmed, you can expect to see Ben Long and The Space DJ’z around for some considerable time yet.