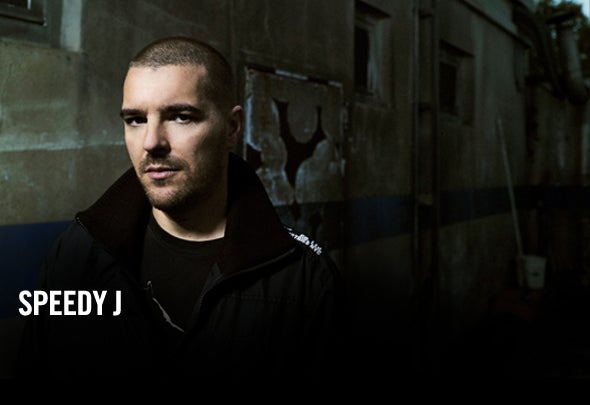 After fifteen years of techno Speedy J has come full circle. He's making techno again. But what a wide circle it was, and how fickle the trodden path. Over the years he has collaborated with video-artists, filmmakers and advertisers, made the pioneering DVD Umfeld and has continuously been pushing the boundaries of electronic & experimental dance music. 'I just constantly want to do new things,' he explains. Most recently this has been exemplified in his new label Electric Deluxe, which will issue digital releases only. Jochem Paap (the Rotterdam artist owes the nickname Speedy J to his DJ skills) is unanimously considered to be one of the first techno producers to come from the Benelux. Someone who, together with people like Laurent Garnier, Aphex Twin and his good friend Richie Hawtin, helped raise the genre just after it had escaped the Detroit delivery room. But while techno develops into a multi-faced monster that still dominates many dance floors worldwide, Jochem Paap, after the albums G Spot (1993) and Ginger (1995), turns left and heads for more exciting places. On Public Energy No. 1 (1997) and A Shocking Hobby (2000) the sound wizard exchanges flowing, harmonious techno for a much more complex sound, filled with colliding samples, crackling rhythms and tremendously thrilling turns. This is the time when electronic dance music becomes profound and contemporaries like Autechre, Funkstörung and Aphex Twin have their machinery perform ever more complicated tricks. During those days Jochem Paap converts his studio into a modular system, which wins him the sought-after freedom. Suddenly everything is possible with sound. And if an idea turns out to be more unruly than expected he simply looks for software with which to crack the code of his ideas after all. He discusses sound like graphic designers discuss form, speaking of 'contrast' and 'depth' instead of a little ruffle here or a bass-lick there. 'I am sometimes really chiselling at sound,' he reports from his futuristic studio located in one of the famous cube quarters in Rotterdam. 'In essence my work is about stylising rather than composing.' Stylising is his strong point, he feels. 'I might not be a brilliant musician but I do know very well how to fashion my ideas into a particular form. Out of a few components I try to make something distinctive.' In 2007 he distinguishes himself on the visual level as well when, together with the American video artist Scott Pagano, he makes the pioneering DVD Umfeld. It is an audio-visual, electronic trip, which sets the standard for many composers who want to compose for six speakers in the coming years. 'This project cost me an awful lot of money but I learned much from it,' Paap acknowledges about Umfeld. According to the Rotterdam artist the most important goal was the exploration of Dolby 5.1. 'In electronic music everything has been done before. But 5.1 is still no man’s land, similar to the early days of techno. Naturally this presents one with many possibilities. I can yet again make my own rules.' Remarkably, he makes Umfeld available as a free download on the internet. Those who prefer the physical version find a documentary on the DVD as well. In this forward way Paap is steps ahead of famous artists like Radiohead, Nine Inch Nails and Coldplay, who will later do the same. It reveals much about the Rotterdam artist who, ever since the early days of his career, seems to have had a sixth sense about the direction of the electronic scene and the music market. If anyone was quick to realize that the old-fashioned musical infrastructure was about to collapse, it was Paap. Once he sold tens of thousands of singles and CD’s, but on his new label Electric Deluxe only digital releases will be available. His own as well as those of the musical friends he has made the world over. Although Jochem Paap enjoys chiselling at sounds alone in his cube studio for hours on end, he is anything but an einzelganger. Such is evident in his Collabs-project, through which he has been collaborating with various techno musicians since 2004. The German Chris Liebing and Paap collaborate most fruitfully. Together they play DJ sets in clubs for hours and released the album Metalism in 2005, a ruthless techno-bomb more powerful than the bunkerbusters of the American army. 'Working with someone else provides you with new insights,' says Paap. 'Collabs offers us both the possibility to explore corners which we wouldn’t so readily visit as solo artists. Collabs prospers on the dance floor and after extensive wandering Paap’s recent solo material brings him back to the clubs. 'Right now I feel very strongly about making and releasing techno. My heart is really in dance music after all.'