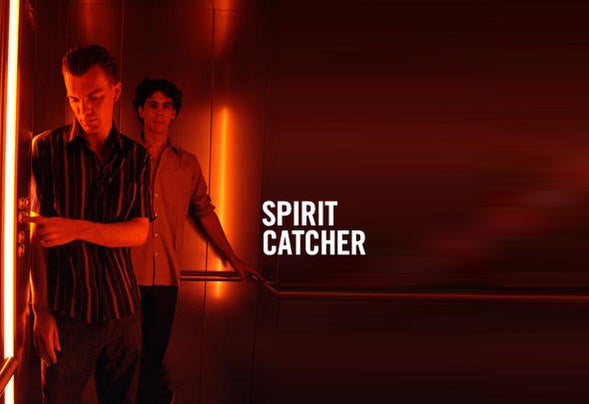 History has spawned hundreds of genius double acts – where two minds and talents collide to form something innovative and artistically challenging. Unfortunately, Spirit Catcher are just a pair of european weirdos. As we all know, exciting and romantic collisions happen in, say, Hollywood or London. Not in Belgium. I mean, does Belgium have C.H.I.P.s? Or Hart to Hart? It doesn't. It has bugger all. No heroes, no drama, no action. Chocolates....beer....and Spirit Catcher. Now listen - Jean Vanesse and Thomas Sohet have been exposed to music for as long as they have been conscious. Jean was even born in a recording studio. His father owned a studio, and absolutely insisted on capturing a high quality recording of the birth. However, initial feedback problems due to the unexpectedly high pitch of Jean's first baby screams meant that Jean had to ‘climb back in' for a second and third take, so his father could take care of the rogue frequency. This led to a deep-seated psychological need for Jean to keep going back in to studios, over and over, again and again, in search of the perfect EQ settings which could set him free from this cycle. Thomas, meanwhile, was born in an ordinary Belgian hospital room to the sounds of an Earth, Wind and Fire cassette of his mother's. As he took his first gaze around the room, he soaked up its covering of black and white tiles. White, black, white, black...strange levers and machines...the vision burned deep into his psyche while the music played, then lay dormant for years. It was suddenly triggered when he saw a synthesizer as a teenager. Those black and white keys, the modulation wheel....the tiles and levers of the grooving hospital room suddenly surged back through his brain. A booming voice inside Tom told him that if one day he pressed them in the right combination, he would be free. He must find The Formula. So he played and played, hiding away in funk bands, trying as many combinations as he could, waiting for the explosive moment when life would finally make sense, as it had in that hospital room. The two were fated to meet. Jean was walking to the shops to get some fresh air and a bite to eat, when he was gripped into zombie mode again, and dragged by unseen forces back towards the studio. Tom was returning from taking his beloved Juno106 into a shop to be repaired, when a tall figure loomed towards him, muttering "2dB down at 90 Hertz....make some room for bottom end....separate the kick....16khz shine...studio.....studio....". Tom stared for a while at this possessed man. "Freak!", he thought, until he stopped - and realised that he himself was a goddamn freak too. Hmmm? And anyway - this talk of studios....who knows....they would be sure to have modulation wheels....The Formula! The Formula!! Tom's eyes flashed white and black, black and white. They were seized together in a gnashing frenzy, bound by their pasts into a crazed march back towards the lure of the studio. And so Spirit Catcher was born. And now? Well, Spirit Catcher have become one of the most in-demand house acts, gracing the finest underground labels with their polished future disco sound. But to those who know them, Tom and Jean are simply a pair of misfits looking for life and love between the keyboard keys and the automated faders. Two kids born into the sounds of the seventies, then immediately grabbed by the cruel talons of music and doomed to seek solution in the groove. Luckily, through the help of well-meaning record labels such as Silver Network, Freerange, Winding Road, Missive and Moodmusic, we can all listen in to the frenzied disco workouts through which they exorcise their murky pasts.