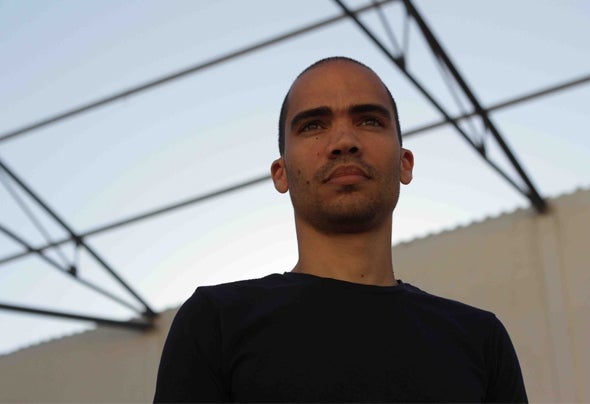 DJ Leandro Silva is an unavoidable reference of the Electronic Music in Angola. He has been a DJ since 1997, and a professional DJ since 2001, and embodies a pleonastic singularity, not only from his individual living as a person, but also resulting from the conjuncture of Luanda’s nightlife.It is true that there are not many cities in Southern Africa like Luanda, where there is such a great heterogeneity of offers (exception made to theWestern-like-feel-like European bars), and where the beginning and end of the evening may be as unpredictable as a snake’s fortune-telling. The dozens of existing micro- cosmos were a fertile field for many people to find, away from great cities like London, Tokyo, Berlin, New York, Barcelona, Hong-Kong, Viena and even Lisbon, in a DJ in Luanda, a universal, religious and almost perfectly human message.As if for all the coincidences in life we had to believe in one absolute and dogmatic faith. Leandro Silva is the paradigm that, regardless of the context, looks and values, success is always possible to come from one’s own work and will, being more or less tortuous the path followed to get to this success. All of this takes, of course, to a progressive soul, inevitably progressive and constructive, orchestral and of musical storytelling, where without pre- formatting, a less-than-three-hour set cannot be heard and understood. In 2007, he becomes a resident DJ in the mythical Elinga Bar where he joins the Movimento X, the promoter of multidisciplinary cultural events, and where his performance as a DJ reaches another level. Owner of an almost inate technical ability in progressive sets and music knowledge originated in his familiarization with various ways of making music, his sets stand out not only for this irreproachable technique, but mostly due to his ability, instinct and flair in putting together magnetic and environmental sets that make the hearing of these sets wanted by many as an experience to go through again and again.And this is when we normally realize we are building the future.Leandro Silva was the residente DJ in the main clubs in Angola, with particular emphasis to Chill-Out e mostly the mythical alternative Elinga Bar, in which he was a resident DJ for five years, every Friday. Residences in the last ten years include:Club-T (2001), Flôr da Sé (2001), Boite Adão (2002), Aquário (2002), Palos (2004), Jango (2005), ChillOut (2006), Eden Club (2007), Kings Club (2008), LasPalmas (2009), Elinga Bar (2007-2013).