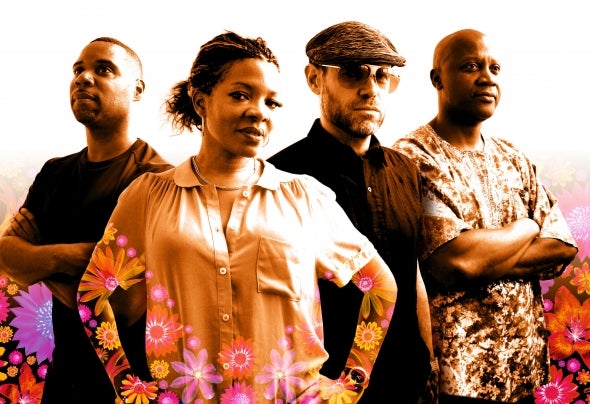 s the sun-drenched months descend upon us, Joey Negro & The Sunburst Band unleash their highly anticipated 4th studio album titled ‘The Secret Life Of Us’ on Z Records. Packed with Sunburst signature sounds - a lush cross pollinating hot soul, jazz, funk, electro-boogie and disco dazzlers, ‘The Secret Life Of Us’ is their most exciting adventure into modern soulful music yet! Who could resist the catchy Chic style disco of the title track with its story of an illicit affair or the witty, “this woman wears the trousers”, 2 step boogie 'My Way'. Things get jazzier on the moody electro 'Jazz The DMX' with Blue Note piano and dubby weirdness, while the rolling down tempo pimp groove of 'Opus de Soul' has beautiful lush live strings that even Barry White might be proud of. Even echoes of the Doobie Brothers resonate through 'Caught In The Moment'. The album also features their glimmering disco-tinged outing, 'In The Thick Of It’, which hit the Traxsource No.1 spot in just 4 days of release this month! What is common throughout ‘The Secret Life Of Us’ is the attention to detail and labour of love that's gone into crafting this wonderful collection of fantastic songs, all performed by a truly heavyweight collective of talent!"Making a Sunburst Band album can be bit of a slog, be it a mainly pleasant slog. All those days and nights spent sweating heavily over the mixing desk take their toll on even the best-made pair of disco underpants ;- ). As cheesy as it may sound I'm doing this because I love it and I want to put the musicality and craftsmanship from the music I grew up with into The Sunburst Band" - Joey Negro‘The Secret Life Of Us’ features band members who regularly play live around the world headed by singers Pete Simpson and Donna Gardier. The nucleus of Tony Remy (guitar), Julian Crampton (bass) and Frank Tontoh (drums) are also joined by a selection of vocal stars from the soulful scene including Angela Johnson, Noelle Scaggs, Darien and Vivienne McKone. Combine this standard of musicianship with strong songs and Dave's sharp arrangements and you've got a potent brew both in the studio and on the live stage. Joey co- wrote most of the songs with Diane Charlemagne, who many will know from Goldie's ‘Inner City Life’. “Diane is super talented and writes with wit and intelligence”, says Joey. Diane also performs vocals on ‘My Way’, 'Definition of Love' and the album title track with Donna Gardier. The Sunburst Band are set to release a whole host of the singles from the album well into next year, employing hot remix talents such Lovebirds, Atjazz and DJ Spinna, to name a few.“Normally I start writing a song with keys and vocals, until I'm totally happy with the melodic structure and lyrics. Once I'm sure it's up to scratch I get the band in and always make sure I record a performance - that's crucial. I want the playing to intensify and go somewhere but without loosing the groove" - Joey NegroLengthy artist careers in the music business are few and far between, but in the ever-changing world of dance music they are scarcer than a signed Moroder 12”. Joey Negro/Dave Lee’s debut release may have been part of the first wave of UK house back in 1988, but more than 20 years later he is still on top of his game. The Sunburst Band, formed in 1998, is a collective born out of Mr Lee’s passion for boogie, funk, disco and jazz. Their debut album ‘Here Comes The Sunburst Band’ won critical acclaim with both old school heads as well as nu breed disco and house fans. Tracks like ‘Garden of Love’ and ‘Delicious’ became scene classics, championed by DJs from Pete Tong to 4 Hero. The follow-up ‘Until The End Of Time’ (2004) featured cuts like ‘Far Beyond’ a hit with the US hip hop guys, and soul anthem ‘Everyday’ (favourited by Annie Mac & Trevor Nelson) Collaborators on the third studio album ‘Moving With The Shakers’ (2009) included Harlem soul legend Leroy Burgess and Chaka Khan’s sister Taka Boom.