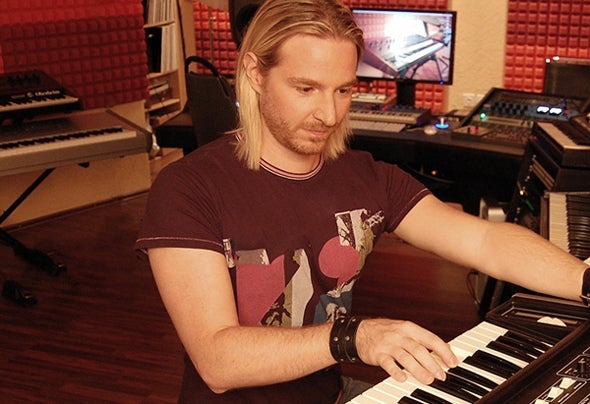 Roberto De Carlo - a truly fitting artist name that conveys artistic musical quality, which is wonderfully expressed in his music. The Italian enriches the music scene as an eminent DJ, top-notch producer and gifted remixer. His temperament, passion and diligence are all reflected in his music.Always inspired by the combination of various electronic music styles and the soulful Disco-Funk of the 70’s and 80’s, Roberto De Carlo started his DJ career already at the young age of sixteen.Due to these important musical influences Roberto De Carlo developed stylish House and Nu-Disco DJ- sets. Soon he has showcased his talent in some of the most vibrating Swiss venues such as Kaufleuten (Zurich), Supermarket (Zurich), Atlantis (Basel) or the Deep Club (Geneva). Furthermore, he is an internationally renowned and much acclaimed artist, who regularly plays in countries such as Russia, Ukraine, Lithuania, Greece, Croatia, Denmark, Germany, Austria and Italy or at the popular and well- known WMC in Miami Beach.Roberto De Carlo began to produce his own music in his recording studio, the RDC Studio, in the year 2000. Highest quality is the most important thing for him, something that nowadays unfortunately got lost in many of the fast living productions. He loves to mix the best vintage analog gear with the latest digital equipment. With synthesizers of the 70’s and 80’s, which he collect ed all over t he world, Robert o De Carlo gives its sound the authentic 80’s style - just like the motto: ‘from soulful to disco - best analog sounds meets digitalera!’.His ambition was shortly rewarded with numerous releases on the most renowned House Label Purple Music and one of the most prestigious labels of the soulful and deep House scene GOGO Music. With his two most successful hit singles ‘You Are The One For Me’ on Purple Music and ‘Soulful Things’ on GOGO Music, he attracted worldwide attention. His excellent reputation brought him remix requests of the most well known labels of the house scene, like Duffnote, Zoo Groove Stereo, Shifted Music and many others. Appearances on CD Compilations such as ‘Masterclass Vol. 2’ mixed by the US legend Tony Humphries on mn2s Records ‘Connect ed’ mixed by Jay-J on Defected, the ‘Chillout Session Vol. 10’ for Ministry of Sound, Hed Kandi ‘Disco Heaven’, just to mention a few, confirm and assert his international success and enrich his discography.As an integral part of the Soulful House Scene, he appreciates to work with notable artists such as Ralf GUM, Miguel Migs, Knee Deep, Jay-J, Richard Earnshaw, Simon Grey and Cool Million, in which also contributes renowned soulful voices like Inaya Day, Sharlene Hector, Joshua, Colin Corvez and Dyanna Fearon.Recordings with musicians like Simon Grey, Faze Action or Opolopo gave his sound a new direction. Wit h ‘Elect ric Soul Power’ and ‘Y ou Are The One For Me’ on Purple Music, as well as his own Remix for Jay-J ‘Reforminator’ on Shifted Music, Roberto De Carlo pointed to a new development towards Nu Disco.His House and Nu Disco singles ’Roberto De Carlo featuring Dyanna Fearon – Searching’ and ’Roberto De Carlo – Stereophonic’ are the first releases that he has officially presented in his own music online store. Check it out!