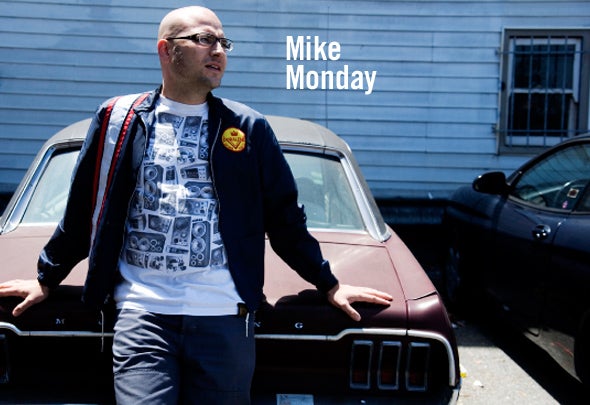 MIKE MONDAY Biography From studying music at Oxford University, to starting one of the early live electronic acts (Beat Foundation) in the 90's with Andy Cato of Groove Armada, to writing a string of underground club hits on his label Playtime, Mike Monday has consistently stood apart from the crowd.  As IDJ said, ʻnot a week goes by in dance music when you don't hear someone new trying to imitate Monday's trademark sounds.ʼ  "What Day is it?" was a Berlin anthem, raved about by DJs from Steve Bug to Josh Wink and Mylo to Rob Da Bank. “Tooting Warrior” hit #6 in the German dance charts. “ZumZum” was in the Beatport top 10 for weeks. “Bhalobashi” was a staple of M.A.N.D.Y. sets who included it on their Fabric mix and was described by IDJ as ʻone of the top 100 essential dance tracks of the last 10 years.' Which is why he's been in high rotation as a DJ  touring all over the world including headline dates at WMC and Sonar parties alongside pivotal ﬁgures such as Claude VonStroke, Jesse Rose, and Tiefschwarz. With his debut album “Smorgasbord” he continued to develop his own unmistakeable style. ʻAn instant classicʼ said Ministry Of Sound.com. ʻAlbum of the monthʼ said IDJ - which also had Smorgasbord on their ʻalbums of the yearʼ list. ʻAn LP we just can't put downʼ said DJ mag. And what he started with Smorgasbord, he has expanded upon with his next album "Songs Without Words - Part 1" due out on Om Records in September 2008. ʻWith Smorgasbord I only started to realise the potential of instrumental music as a medium for writing albums,ʼ Monday says. ʻLyrics make music speciﬁc but instrumental music can mean completely different things to different people.  This allows the listeners to take what they want from the music, making it more personal to them. When I'm writing I always visualise something, but all I give to the listener are signposts or clues in the form of track titles, which I intentionally keep pretty inscrutable.ʼ As a result “Songs Without Words - Part 1” is impossible to classify. From the emotive and entrancing opener “Grace”, through to the comical and catchy “Bad Wind (With A Touch Of Acid)”, to the weird and watery “I Am Plankton” Mike takes us on a journey through a myriad of genres and soundscapes. From house, funk and hip hop to disco, chill out and techno, Mike is at home in any genre and uses them to draw us into his unique musical world. So now he's completed the album what's next? With his monthly podcast "Monday Club", a regular blog "The Unanswered Question", as well as worldwide album tour DJ dates you wouldnʼt expect him to have much time for anything else. But he has decided to go back to his performance roots and come up with a live show. As Mike says, ʻthe music on Songs Without Words needs to be performed live, and Iʼve got some great tricks up my sleeve which Iʼm desperate to try out in front of a live audience. And after all the years of DJing Iʼm craving the spontaneity and danger that a truly live show can bring. Forget about a boring laptop set - expect something very different.ʼ But then - what else but ʻvery differentʼ would you expect from Mike Monday?