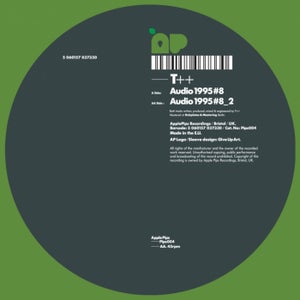 Resident Advisor Review 4/5:
It seems like both Appleblim and Shackleton have taken quite a shine to Torsten Profrock, AKA T++, over the past few years. Profrock is the only artist to be commissioned to do two separate remixes on the now defunct Skull Disco label, and here he appears again on Appleblim's own Apple Pips label for his only solo release of 2008. As the titles would suggest, both tracks that appear here were originally live jams from 1995, but Profrock has revisited and re-edited them in Ableton Live before sending them over to Dubplates & Mastering to add the final touches. (It's little surprise that he's using the now ubiquitous Ableton to chop and change these recordings, seeing as his Monolake partner-in-crime Robert Henke had a major hand in engineering the software.)
"Audio1995#8" is the closest that T++ has come to straight up techno in quite a while, as mechanical delayed stabs fuse with fluttering sub-bass and a stern reverberated snare. It's quite a functional record, which doesn't exactly do much apart from modulate the more trebly percussive sounds, but will go down well in dark techno sets favoured by Berghain's acolytes.
The b-side, again with the imaginative title of "Audio1995#8_2," offers a much different insight to Profrock's output during the mid-90's. At a time when boundaries were still being pushed in drum & bass, Profrock was taking inspiration from those sounds, using a flailing junglist breakbeat that he's pitched down here to a more dubstep-compatible 140bpm. Closer inspection reveals numerous detailed touches, such as the subdued skittering percussion that mutates and modulates throughout the entire track's duration, but make no mistake-this is a dark and dirty slab of breakbeat techno that's custom made for cavernous warehouses and grimy basements.