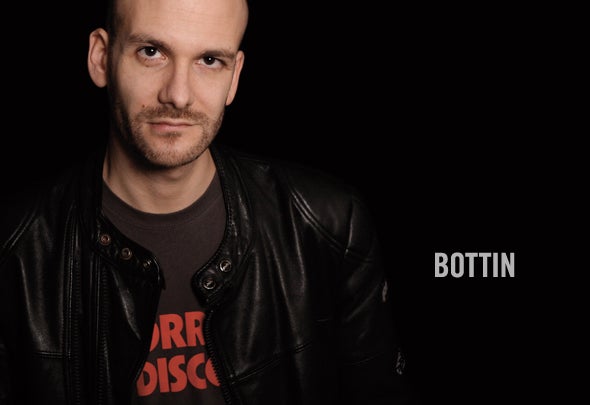 Bottin (1977) is producer, dj and sound designer based in Venice, Italy. He soon moved to the forefront of the contemporary disco scene with his concept album "Horror Disco” on Bearfunk Records UK, which garnered critical praise for its dashing display of all of Italo’s delights without the pastiche. The album’s title may conjure up images of a Goblin inspired trip through Dario Argento horror movie nostalgia, but in actuality it is filled with thick, Moroder-esque basslines that inspire dancing rather than dread. Bottin makes music only an Italian can make... Take a youth spent against a background of old Italian Giallo soundtracks, add in late 70s Italian disco influences, a touch of free and easy west-coast vibe and a smattering of kitsch. That just about half describes Bottin. Other acclaimed releases have been “Fondamente Nove” on Eskimo Records (2008) and “No Static” for American label Italians Do It Better (2009) while early works include two albums (2002, 2004) as well as arrangements and remixes for major Italian pop artists like Lucio Dalla, Donatella Rettore, Sergio Caputo and Spanish group Chambao. Bottin also worked at Fabrica, the Benetton creative research center founded by Oliviero Toscani. For Colors Magazine he curated the Color Music series, presented at Sonar festival in Barcelona. For the Biennale of Venice he designed audio for Spanish Pavilion by Muntadas. In 2010 Bottin returned on Eskimo Recordings with Galli/Piazza Venezia (produced together with Rodion) in which the signature italo-disco approach gradually blends into a housed-up dancefloor anthem. Shortly after, Nang Records releases “Discoursive Diversions”, a collection of remixes for artists like Lindstrom, In Flagranti, Tosca and many more. 2011 saw the release of the Discocracy 12" single (followed by the Discocracy Revisited remix EP) as well as Aztaro, a collaboration between Bottin, Justus Köhncke and Rusty Egan of Visage. After releasing two singles (New Religion and Jabberwock) and later album as Tinpong on Nang UK (together with Swiss-Ghanese vocalist Joy Frempong), Bottin is currently working on his own new album. With an exhaustive touring schedule covering over 20 countries and 4 continents, from North America to Australia, Brazil to China, from Europe's best underground spots to large events like We Love Space in Ibiza, Bottin’s reputation as both producer and DJ is steadily growing. His sets are an unpredictable journey into space disco, italo rarities, and deep funk. A reckless blend of retro-futuristic sounds and contemporary electronica that always sets the dance floor on fire. When it comes to nu disco, Italians don't necessarily do it better. But Bottin makes a pretty good case (Pitchfork)