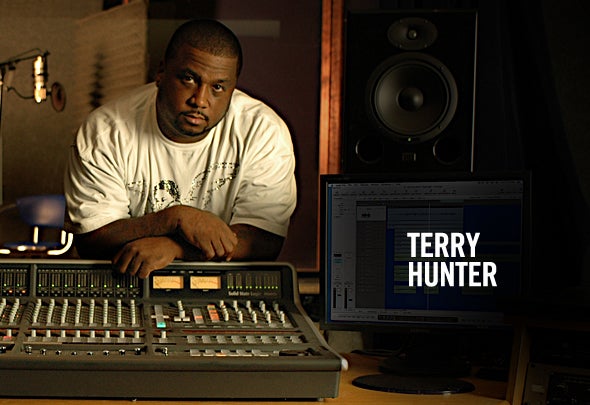 With his roots intertwined in house music for the past 15 years, Terry Hunter has traveled the globe sharing his passion for soulful house music while continuing to produce dance-floor packing hits for his T’s Box record label. Pleased with the success he has garnered in the house music community, but still looking to fulfill his appetite with new genres of music Terry’s latest adventure in his musical journey showcases his production talent in the hip hop arena. Born in August 1970 on the Southside of Chicago, Terry was introduced to music at a young age, “I really didn't know I could make a living at becoming a DJ at first. I just thought it would be an expensive hobby because at the time I was a vinyl junkie which was an expensive habit.” Terry continues, “My love became so strong for DJ’ing that I spent entire summers in my bedroom & local records stores just hanging around & not playing with my friends. That’s when a few years later, I knew in my heart this is what I was born to do.” Having the influence of music all around him, at a time when the Chicago house music scene was on the verge of an international explosion, Terry debuted onto the scene with his first release, a house track entitled “Madness.” “I created a big buzz on the record by playing it myself at various parties," Terry states, “It started out as a basement track, but became much more.” Having made an impact on the local scene with his first track, he moved on to create a style of spinning that consisted of collaborating great songs with a unique soulful presence. Being one of the masterminds behind UBQ, he then teamed up with Music Plant, a music production and talent management company. Terry began DJ’ing throughout the world enlightening his fans with his signature sound which has become a blueprint for many DJs to follow. During these travels, various musical influences abroad expanded his outlook, which allowed him to include some of it into his production. Terry has lent his production talents to classics such as “When I Fell In Luv”, “Sweet Music”, “Out on the Dance Floor” and the club crossover anthem from Georgie Porgie, “Life Goes On”. He has also remixed tracks for artists such as Michael Jackson, Twista, Mary J. Blige, and Masters At Work. Terry has also co-written tracks with Raheem DeVaughn, “You” (Jive), Syleena Johnson, “And He Makes Me Say” (Jive) and Rhymefest “Mr. Bluecollar” (J Records). Alongside longtime friend Kenny Dope, Terry also remixed the Kanye West track “Addiction” (Dope Wax), which has become a staple in DJ record crates. An active member of the Violator All Star DJ’s, Terry is excited about his work with fellow Chi-town native Rhymefest. The two have formed Plugg City an outlet for Chicago hip hop and R&B. Terry has also been instrumental in the development of Twone Gabz an up and coming Chicago hip hop artist. Asked about the future, Terry declares, “I see myself with plenty of hit records while trying to educate the younger generation to appreciate musicianship along with their own individual style.”