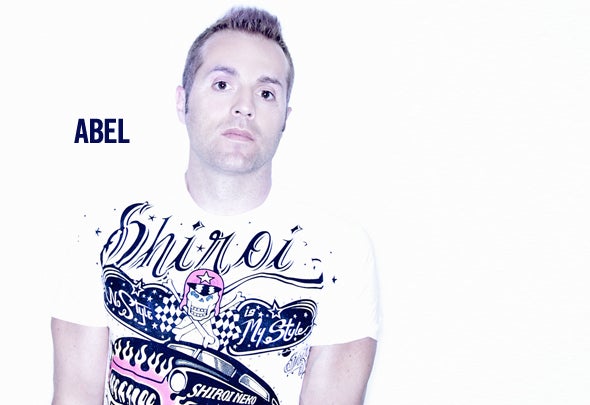 Celebrating 20 years behind the decks we can now say Abel Ramos has dedicated his life to music, with one aim to make people dance. Behind the DJ there is a wealth of experience, which has earned him various awards in Spain. In 2001 his sound and sets began to be exported and noticed in various countries, The Netherlands, UK, Sweden, Italy, Germany, Switzerland, France, Peru, Morocco and others. He has been awarded on various occasions the best national deejay award (Spain) by different media publications and was voted in the top 250 in DJ magazine (UK) award. Abel was also chosen to represent Rolling Stone Magazine's Spanish tour for 2004 alongside DJ Chus. He was also used as the official image for the first videogame dedicated to the world of the DJ for the Sony Playstation: "DJ Decks&FX, Live Session". 2004 was also the same year in which he started his first SOLO party, 8 hours of Abel Ramos behind the decks. This has meant that was able to highlight a wide variety of music from House, Tribal, Techno and Trance. His last Solo party attracted more than 4500 people at Fabrik Madrid 2007. 2005 was also the year in which Abel's international DJ career began to take off. He performed at "Pleasure Island" and "Salinas Beach Festival" in the Netherlands and also had his first tour in Australia. Also Abel returned to DJ Magazines top 250 DJ list. He improved his ranking from 220 to 155. 2006 was an important year for Abel as a producer. He signed a deal with Spinnin' Records in The Netherlands and also opened up new territories as a DJ, Poland and Bulgaria. In 2007 the repercussions of Abel first release on Spinnin' "Electro Fun" open doors to the world with the highlight being his tour of Indonesia. 2008 has been a year in which Abel has been concentrating in the studio with releases on Spinnin, Doorn (Sander Van Doorn's label), Axtone Records (Axwell's label) and a great remix for Juicy Music (Robbie Rivera's label) of the hit "Paradise". The highlight was the presence of Abel as the only Spanish representative of the first Edition of Sensation in Spain. 2009 could not have started better. After the success of "Rotterdam City of Love" and his bootleg remix for Fayboy Slim "Right Here, Right Now" the recognition as a producer has brought Abel to a completely new level. His releases on Spinnin Records and Pool Music (Antoine Clamaran's Label) have now over the respect of many of the big name DJ's around the globe. Another highlight has been his remix of David Guetta's first single from his new album "When Love Take Over" featuring Kelly Rowland from Destiny’s Child. Roger Ranchez presented his remix exclusively to the World on his Release Yourself radio program. Abel is also currently working on a new remix for "Around The World" by Daft Punk. Alongside his current projects as DJ/producer Abel also has a weekly radio show called Concept Music transmitted on Loca FM, Spain's most important FM dial radio station. www.myspace.com/abelramos www.abelramos.es