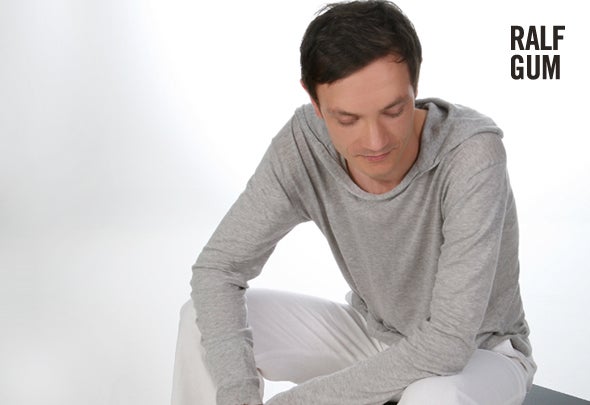 Ralf GUM - www.RalfGUM.com – www.GOGO-Music.net With unique music and consistent work, Ralf made it to one of the most popular German house artists and one of the few who also enjoys international popularity. Since Ralf`s DJ career started in 1990 he stayed true to his passion for cool and diverse house music. Harmony & Soul & Groove – just some aspects of Ralf's typical sound. With a feeling for the vibe, he convincingly played at more than 200 German and international spots, including gigs all over Europe, Japan and the United States. Ralf GUM's producing since 1993 and worked with notable artists as Inaya Day, Michael Procter, Wunmi, Beady Belle or the fascinating Concha Buika. In 1997 he teamed up with CrisP. Together they released on top labels like Peppermint Jam, Tommy Boy, Compose, InfraCom!, Sole Music, Milk & Sugar, Oyster Music and others. The two friends produced some well-known songs, among them (Tommy Boy / Flamingo Discos / Milk & Sugar), "Helena Brown - Canção Dourada" (Peppermint Jam), "Ralf GUM – Easy", "Ralf GUM feat. Beate S. Lech – Warrior" or „Ralf GUM feat. Concha Buika – Nobody can touch me" (GOGO Music). Not to forget all fine remixes for a bunch of other artists. Ralf GUM's productions made it to a worldwide renown trademark in the house scene and UK'S TTR magazine called Ralf "one of Germany's finest" in 2005. But Ralf not only covinces as a producer - first of all his DJ-sets have helped him building up his reputation as an upfront tastemaker. After various residencies in South-Germany (e.g. Unbekanntes Tier – Stuttgart or Yellow Kitchen – Mannheim) to date Ralf plays at two spots regularly. In 1998 the "Airport" (Wuerzburg /Germany) got the living-room for his interpretation of house. Since then he captures the crowd with his sessions every Friday night and played alongside with artists like DJ Gregory, Martin Solveig, Lenny Fontana, Mousse T or DJ Pippi, to name just a few. Since 2002 you can enjoy Ralf's NewGenerationSound at "Studio- Lounge" (Wuerzburg) as well. Some more clubs-highlights he played at include: "El Devino" (Ibiza, Spain), "Mo'Vibes" Festival (Munich, Germany), "Amika" (Miami, USA), "The Room" (Tokyo, Japan), "ECU / Echoes" (Rimini, Italy), "Garito Café" (Palma de Mallorca, Spain), "Passage" (Vienna, Austria), "Garten Club @ Volksgarten" (Vienna, Austria), "Barokko" (Budapest, Hungary) "Marula Cafe" (Madrid, Spain), "Ministry of Sound Radio" (London, UK), "Muak @ Herbal" (London, UK), "Oxa" (Zürich, Switzerland), "Pacha" (Palma de Mallorca, Spain), "Rave on Snow" (Saalbach, Austria), "Nature One" (Germany), "Republic Cafe" (Salzburg, Austria), "Cocoon" (Frankfurt, Germany). In 2001 Ralf GUM started to build up his label "GOGO Music". The international club-scene quickly recognised the label as a sure source for quality music and gave vast feedback. Lots of great reviews of the releases followed, as well as interviews and features in different media from magazines to TV. Late 2005 GOGO Music was called "one of the hottest imprints around" by UK's leading magazin "Blues & Soul" and Germany's "Subculture" wrote that "GOGO Music is the prime German house label". In 2003 Ralf initiated the own GOGO Music Radioshow. Besides his sets the weekly show features all DJs of the GOGO Music family. The show is broadcasted by 15 stations around the globe: radio42.com (Germany), tokyma.fm (Switzerland), swissdeejays.com (Switzerland), ssradio.com (UK), stylenetwork.fm (Canada), rhodosdj.com (Greece), Fullhouseradio.com (UK), RadioFG.com (France), radiostylo.com (Poland), DFRRadio. com (Tschech Republic), IbizaGlobalRadio.com (Spain), Radio 105 (Italy), Radio Planet (Italy), Unverdance (Canary Islands, Spain), StraightUp.com.au (Australia). Next to Ralf GUM's house productions, he started a second project entitled "SUGAR BEAT". In collaboration with drummer Steffen Meder originated a unique live performance: "Jazzy Live Drums & Uplifting Spinning". Out of the inspiring club-sessions quickly developed a production team, again together with CrisP. With SUGAR BEAT's irresistable sound of fusion a new broken beat style is being created. After their sweet remixes on GOGO Music, in 2006 the first own productions have been released on the "GOGO Music Spring Collection 06". During his career Ralf had the pleasure to compile and mix various CD-Compilations. Including in 2004 "Arrival Vol I" (Double Mix-CD together with Howard Donald - Ex Take That, for which they toured together all over Germany) and "Studio – the finest in lounge and house music", which was selected as CD of the month in the German "Raveline" magazin in December 2004. In Februar 2005 the first GOGO Music labelcompilation "GO!" including highlights of 3 years label work was released. It was called the best compilation of the year by UK'S TTR magazin. In October 2006 the second part "GO!!" will hit the market. In 2006 Ralf GUM held his first GOGO Music Winter Music Conference event in Miami with great success. With an impressive line-up including e.g. Kenny Dixon Jr aka Moodyman, Theo Parrish, Markus Enochson plus the GOGO Music DJs, the party went down in a storm and was one of the most talked about events at the conference. Other highlights worth to mention include an apprearance at MTV's "Battle of the DJs" in April 2003 and invitations to the You.FM Clubnight (Hessischer Rundfunk, 2 times in 2005 and one time in 2006). The hallmark of Ralf's sound is his love funky harmonies coupled with wicked underground beats and crisp percussion. But the distinctive groove isn't the only reason for Ralf's success – his passion for all things soulful shines through in all he does. This helps him creating a simply irresistible groove every time he emerges from the studio or gets the club-crowd jumping.