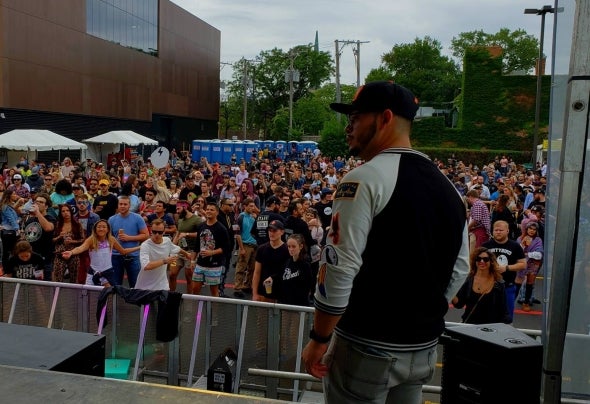 Keith Rafael Perez, better known as KE (Kid Enigma) is a Chicago-born Mexican-American artist with a never-ending desire for Peace, Love, and Tranquility—moral values that keep him balanced as an individual, an artist, and a human being. KE manages to stay balanced by analyzing his peer-to-peer interactions and his environment and its trends. He understands that many individuals lack appreciation for the simple blessings in life in a world disconnected by technology. Therefore, instead of contributing to the cycle of repetitive commercial "mainstream" music, KE has the freedom to produce music with substance with the purpose of unifying people on the dance floor—a return of investment much greater than a monetary profit.After KE graduated from grammar school he purchased his first pair of plastic turntables. His oldest brother taught him a few things and gave him his crate of Chicago House classics. By age fifteen, he picked up his first residency in a restaurant turned lounge where he met several up and coming promoters and DJs. By age six-teen, he had three weekly residencies; mixing Open Format under the moniker “Kid Enigma.”At the age of eighteen, KE grew tired of the Open Format cycle and decided to renounce all of his residencies to focus on his original music. After a year of preparation, KE launched himself as a producer and teamed up with Edgar “MAC” Pineda to establish “b natural”. Thus began the era of the “b natural mixtapes” to build recognition for the record label and KE’s following while he developed his production skills.Today, his main objective is to promote life through the power of music and artistic expression, so that we can all value our presence on earth by stimulating people to get away from themselves.Enjoy the dance floor. Embrace your struggle. Enjoy Life. Stay PositiveKE