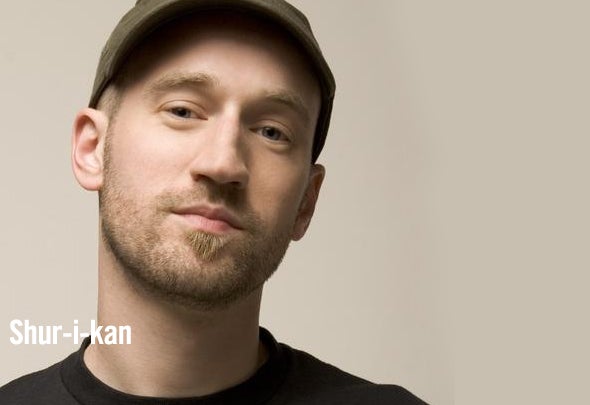 Shurikan aka Tom Szirtes' trademark blend of musicality with cutting edge electronic production has been turning heads and making fans for over six years now. Whilst learning his chops playing keyboards with various jazz, funk and rock bands around London, Tom was working on his own material on the side. At his first solo gig he was discovered by renowned producer Tom Middleton (Jedi Knights, Global Communication) who released Shurikan's debut track "Niomi's Dream" on the now seminal Jedi's Night Out compilation for Mixmag. Shurikan is a favourite and long time contributor to Freerange Records label a relationship that started with the distinctly dreamy jazz influenced "Advance" album in 2001 that caught the ears of luminaries such as LTJ Bukem, Mixmaster Morris and Pete Lawerence of Big Chill. The more dancey followup album "Waypoints" (2004) cemented Shurikan's reputation as a producer to watch for. 2006 was a milestone for Shurikan with a string of highly acclaimed house influenced EPs such as Living Inside (remixed by Mike Monday) and Future Fantasy, I Want It, Finding Goa and Special Powers (collaborations with deep house don Milton Jackson), Underground Soul and remixes for the likes of Dave Lee, Trackheadz and Miguel Migs. Tom is now a firm favourite amoungst the house community with his productions and remixes in constant demand. As a result of which Shurikan has been building a reputation as a formidable international DJ and has traversed the world many times bringing his unique sound to clubs as far flung as Tokyo, Moscow and LA. This only tells one half of the story however as Tom's other projects include hiphop production (having produced on Katch22's front man's HKB Finns MOJO award winning album Vitalistiks), regularly performing with Tom Middleton's AMBA project and improvisional super group The Bays. Tom has also collaborated with the likes of singers Elizabeth Troy, Clara Hill and has been producing/remixing for clients such as Universal, EMI and Virgin Records as part of his Showbizkids partnership with Dan D'Nell Jones. Whatever the future holds for Tom and Shurikan this is surely only the shape of things to come.