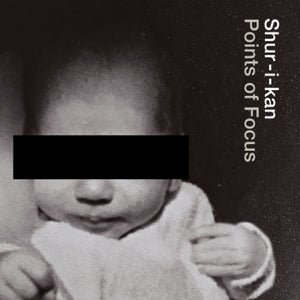 Tom Szirtes, aka Shur-i-kan, is best known for his deep house recordings on top dance music labels such as Freerange, Lazy Days, Urban Torque and Dark Energy. While the producer has been steadily releasing EPs and remixes over the years, albums have been rarer. After two critically acclaimed LPs for Freerange,Advance(2001) andWaypoints(2004), there followed a twelve-year hiatus beforeBarely Breathingwas released under his real name.


This latest album,Points of Focus, is inspired by the chill-out mixtapes of the 90s, such as KLF'sChill Outalbum and Aphex Twin'sSelected Ambient Works. Featuring unreleased material recorded over a fifteen-year period, it brings together ten tracks that, at the time of writing, weren't conceived as belonging to a single project but as impulsive detours from the producer's deep house journey. However, once assembled and remastered, it was clear they had become more than the sum of their parts, telling a story of their own.


Kicking off with the Burial-inspired dubstep of 'Hollow', we follow Shur-i-kan's searching bass lines and haunting harmonic footsteps down secret passages and into hidden corners of this varied beat- and tone-layered dreamscape. Each new discovery unfolds with a sense of wonder, from the palpable excitement of folk-tinged stomper 'Where I Stand', to the wry amusement of jazz-vibed 'Eine Kleine Loungemusak', the hypnotic stupor of 'Ebb and Flow' and the near-spiritual rapture of 'Words to Say'. As the album draws to a close, we enter a Lynch-esque 'Slumber State', one last dance with the dark, before reaching the drift-away peace of 'On the River'.

Points of Focus shows us once again Szirtes' ability to seamlessly blend multiple genres and influences into a rich textual patchwork, all the while retaining his own unique voice and impeccable production values. It's an album for your inner space - so plug in, sit back and enjoy this antidote to the anxiety of the outside world.