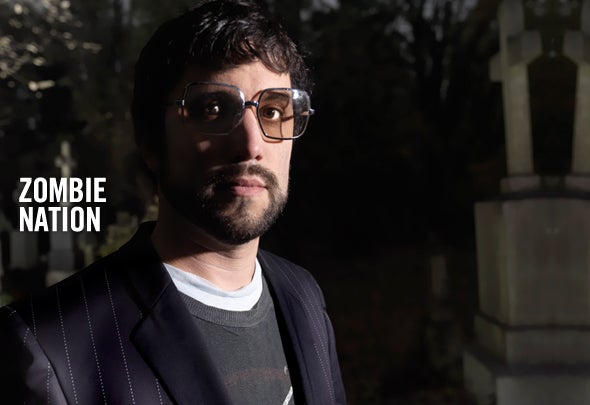 Biography Zombie Nation 2008 Zombie Nation came to life in 1999 when the first 12 inch record was released on DJ Hell’s International Deejay Gigolo Records. Before Zombie Nation was born, the ZN mastermind Florian Senfter who also goes by the name John Starlight or Mr. Splank used to spend his time squatting abandoned factories to organize parties with his back then crew in Munich/Germany. Those were the days where acid was considered food and strobe light substituted for sunlight. So, what are the most famous songs of this ahh Zombie Nation? Is it Souls at Zero? Paeng Paeng, Booster or Kernkraft 400? “I created a Monster, it developed a life of it’s own” is what Splank says about Kernkraft 400. The song is considered be one of the most remixed electronic songs ever, amongst them also the bootleg “chant” mix, which has made Kernkraft a sports anthem around the globe Undisturbed by this, Splank kept on doing his thing and released the 3rd ZN Album “Black Toys” in 2006. It was highly acclaimed by fans and critics for it’s diversity and organic feel. Splank also releases as John Starlight. Remember the banging Blood Angels? The story continued with ZZT in 2007, a collaboration between ZN and Tiga. They released the nerve wrecking “Lower State of Consciousness” – together with a banging remix by Justice on the flip side. Currently, Zombie Nation has an album in the making (release date: Feb/March. 2009). Driven by the will to “create as many perfect moments as possible”, Splank has travelled the world during the last 10 years and played shows from intimate clubs to huge festivals and made Zombie Nation live its own brand. Zombie Sound – that means funky, dirty grooves between electro and house, bass-laden raw energy. In other words an unfiltered mix of styles. Splank likes to update his musical production with every track: “Music is stored energy” as he always points out; and like a good cook would choose only organic ingredients in the Zombie Kitchen all production is based on hardware and analogue gear.