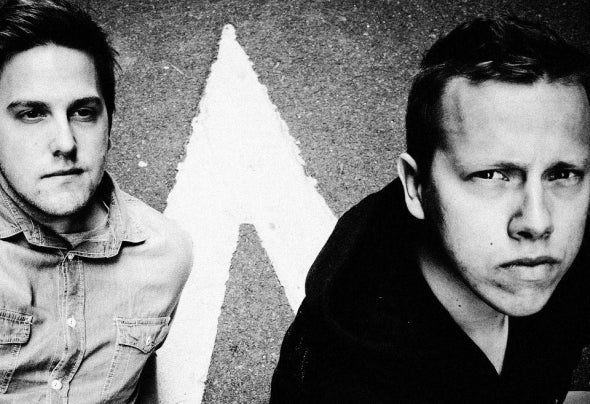 Call it a musical movement, a rebellion against mainstream dance or a new way of looking at club music. Whatever it was, a fresh breeze of electronic music emerged around 2007, led by artists such as ‘Justice’, ‘Boys Noize’, ‘Crookers’, ‘The Bloody Beetroots’ and ‘Soulwax’. Like many of us, Jochen Sablon and Vincent De Boeck found themselves in the midst of this musical revolution. Vincent, a known and respected DJ, promotor and graphical designer in Belgium’s capital. Jochen, guitar player in several post- rock bands around the region. While coming from different backgrounds, the electronic breakthrough of 2007 brought them together and saw the light of a collaboration that would conquer the world. T he guys fittingly gave their project the name ‘Sound of Stereo’.It is said that quality always distinguishes itself. “Sound of Stereo” was a hit from the start. Their first tracks ‘Nic Nag’ and ‘Supah Dupah’ were played worldwide by artists such as ‘Crookers’ and ‘The Bloody Beetroots’. In the fall of 2008, not only a couple of months after Jochen and Vincent joined hands, “Sound of Stereo” was signed to the infamous Belgian label ‘Lektroluv records’, home to artists such as ‘Mumbai Science’ and ‘The Subs’. Lektroluv gave home to ‘Sound of Stereo’s vision and forward-thinking branch of electronic music. In 2009, Jochen and Vincent released two new EP’s on Lektroluv: ‘Heads Up’ (including a videoclip with half a million views) and ‘Zipper’. Both achieved worldwide praise and were supported by artists such as ‘Fake Blood’, ‘Armand Van Helden’, ‘MSTRKRFT’ and ‘Crookers’. The success of their ’09 EP’s delivered them a ‘Music Industry Award’ nomination. Only a year after the birth of ‘Sound of Stereo’, Jochen and Vincent had put their mark on the electronic world.After their music, it was time for ‘Sound of Stereo’ themselves to go overseas. In 2010, ‘Sound of Stereo’ released their ‘Flatland EP’ on Steve Aoki’s ‘Dim Mak’ label, followed by a tour throughout North-America (SXSW in Texas, WMC in Miami and various clubs in the USA, Mexico and Canada). Later that year, Jochen and Vincent released their ‘Helium’ EP and several remixes, going from underground artists such as Proxy (Turbo Records) to R&B superstars Ciara and Ludacris.According to their critics, ‘Sound of Stereo’s music was maturing and evolving into a more complete sound. The following year, 2011, ‘Sound of Stereo’ travelled even further to Asia and Australia to be part of the ‘Future Music Festival’ among other artists such as ‘Chemical Brothers’, ‘Richie Hawtin’ and ‘Steve Angello’. Inbetween tours, they found time to release their ‘Hurricane EP’ and ‘Mineral EP’ and kept on remixing artists such as ‘ZZT’ (‘Tiga’ and ‘Zombie Nation’) on Turbo Records. In September 2011, The famous radio station ‘Studio Brussels’ approached them to fill a monthtly residency slot, which would convince friend and foe that ‘sound of stereo’ are - next to established producers - also passionate DJ’s.It’s a funny thing, that how popular they may be, ‘Sound of Stereo’ will never truly be satisfied with their work. Jochen and Vincent have played on events such as Tomorrowland (Belgium), I Love Techno (Belgium), Electronic Daisies Festival (USA), Beatpatrol Festival (Austria), Amsterdam Dance Event (Holland) and Future Music Festival (Australia). In 2012, the duo went for a surge to bring the ultimate “Sound of Stereo” experience. The duo worked most of the year on an audio-visual liveshow, combining older, current and unreleased work with spectacular visual elements, ready to take on 2013. For Jochen and Vincent, a lot has changed over the five years. But some things will never. Their passion for electronic music and their drive to push boundaries. Never satisfied, always looking ahead.