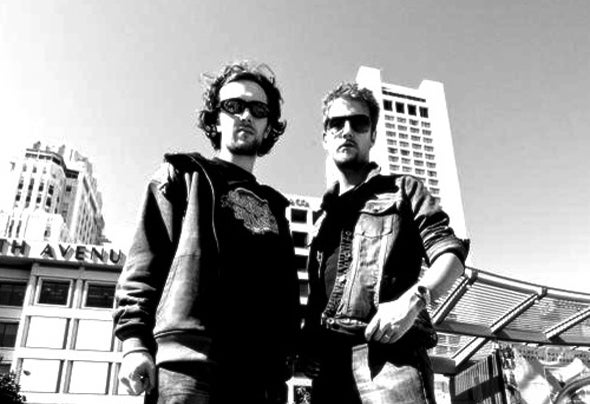 Electric Soulside is a Belgian duo based in Brussels. The duo comprises two brothers, Patrick and Steve Hoody who have established themselves in the recent years as creative artists and have garnered praise due to their unpredictable tendency to merge styles, such as Electro House, Tech Funk, Indie Dance / Nu Disco, Breaks and Dubstep. They inject all their energy into their productions to ignite dance floors all over the world. In 2009, they've played at the Burning Man Festival in Black Rock Desert in Nevada which is one of the best festivals in the world. Since then, Patrick and Steve have never looked back, they've played plenty of shows in the United States, Asia and Europe. In 2010, Electric Soulside brought lots of massive tunes which have rocked the dance floors worldwide. T hey've played at the Ultra Music Festival in Miami, the most prestigious and biggest electronic music festival in the United States.Also, they are DJs of the famous Jefr Tale's Root Society. In the near future, the guys are going to start the US tour to promote their forthcoming album which is going to be released on Burn The Fire. Electric Soulside have played with superstar DJs and producers, such as Deadmau5, David Guetta, Steve Aoki, Martin Solveig, Skrillex, Joachim Garraud, DJ Dan, Carl Cox, Afrojack, Bart B More, Congorock, Boys Noize, Wolgang Gartner, Mstrkrft, Dada Life, John Dahlback, etc. Electric Soulside have worked with lots of well established record labels, such as Umek's label 1605, DJ Dan's label InStereo Recordings, Elite Force's label U&A Recordings, Meat Katie's label LOT49, Cold Blank's label Burn The Fire, Lazy Rich's and Hirshee's label Big Fish Recordings, the respectable Sick Slaughterhouse label, Gender Fix's label BugEyed Records, Donald Glaude's label Donald Glaude's Records and James Amato's label Potty Mouth Music. The brothers have successfully flirted with the Indie Dance / Nu Disco scene and populated with artists, such as Steve Aoki, A-Trak, Boys Noize and Justice. Electric Souldside's Indie Dance / Nu Disco singles "Feel Funky" and "Moon Roller", both released on Burn The Fire, were sitting at #1 and #2 in the Indie Dance / Nu Disco Top 100 chart at Beatport for over a month and a half. Furthermore, as far as the Breaks Top 100 chart at Beatport is concerned, brothers' "Beezy" remix was holding #1 for 2 months and was staying in the chart for as long as 9 months! The remix was included in the Beatport Music Award Finalists "Top Breaks Track of the Year 2011" and also chosen as a finalist in the "Best Break Remix 2011" in the International Breakbeat Awards. What is more, their "Soul On Fire" original production was sitting at #1 in the same chart. One is bound to know that Electric Soulside's future is going to be as bright as their past since they just can't stop!