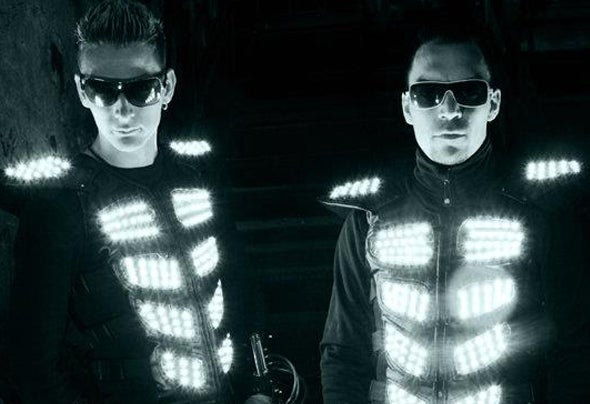 Marvin Hell and Erik Venhues aka Microdizko met each other at a ‘run-of-the-mill’ night out in Berlin. They lamented the boring state of events in Germany and decided that, together, they could create an innovative sound and an energetic show. Electrixx was conceived out of Marvin and Erik’s love of Electro Trash, Industrial and EBM infused with their combined influences of club life at that time. In an era of vinyl- only releases, their first pressing "Frequenzstorung" sold out within a week, landing at #2 on the European Club Charts (ECC), Electrixx had arrived! Marvin and Erik never looked back, continuing on their upward trajectory with each and every release such as “Tokyo Rush”, “Just A Freak” and “Cumshot”. They consistently hit the Top Ten of club charts around the world at the time the “Electro House” genre became an integral part of the music industry. The advent of the MP3 revolution did not slow the success of Electrixx at all but served to broaden their reach around the globe! The Beatport charts soon became the world standard of success in EDM and were quickly taken over by Electrixx. Original productions, such as "My Bassline", "Children Noize", "The Music" & "No Discussion" all hit the Beatport Top 20. Their single "Tetris" proved to be a crossover hit, not only taking the coveted #1 spot on Beatport but spawning a collaboration with US Hip Hop star Flo Rida which was chosen as a theme song of the Walt Disney movie “Step Up 3D”. Furthermore, Tiesto made it an integral part of his Kaleidoscope tour. Since then, releases such as “Crispy Cake”, “Some Beats” and “Cyclus” as well as their official remixes for Deadmau5, Zedd, Felguk, Westbam, Hardy Hard and Tomcraft have proven to be “must have” tracks for every Electro House lover and DJ around the world. 2012 is proving to be an action packed year with many fresh releases, international shows, including the upcoming world tour called “Dance or Die”. The new show will be a live act, based around the dirty electro beats that electric is known for and will include complete personalized Video LED suits that will be controlled by Electrixx themselves. This will be a must see event! The tour will be filmed and footage from the shows will be used to create an Electrixx Live” DVD, which is set to be released in September 2012. Electrixx will be giving away 4,000 DVDs as a special gift to their loyal fan base. It’s so hard to explain in words the plans Electrixx have for this year and we know you don’t care about the words, you just want the music! In the past few years, Electrixx has become a force withinthe EDM scene with over 160 live shows in 2010 and 170 live shows in 2011; they’ve reached the mind and bodies of over one million people and flown almost 750,000 miles in the past three years. 2012 is your year to be part of Electrixx. It ’s your choice, with their extraordinary sound and performance, they are here to stay, whether you like it or not!