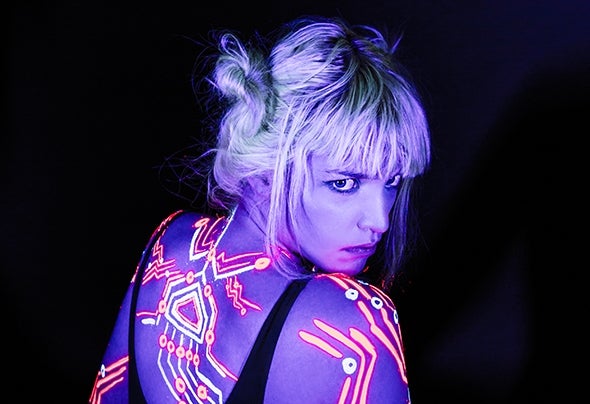 Lydmor is Copenhagen based Jenny Rossander, an electronic producer, composer, singer, writer and general troublemaker. With her thrilling energy she’s stirring up the minds and hearts of her audience.With lots of initiative, Lydmor has made her dream come true to tour most of the world with her music. No matter if she plays an acclaimed festival, a famous club or the tiny living room of her greatest fans, every single one of Lydmor’s shows means a highly intense experience. With her irresistible voice and unabashed honesty Lydmor places the little hooks of her melodies and lyrics into the electronic soundscape and she will flirt, dance, cry, scream and hug her way into your heart.At times it seems as if Lydmor is everywhere at once. In one moment she is standing on the counter of a venue in São Paulo, singing her heart out while the beat is pumping over her sweaty dancing audience. Next she composes a soundtrack for an animated fantasy series or finds new musical expressions as a guest singer or in collaborations with other musicians, such as Takeshi Kobayashi, Arsenal or Anoraak.In 2016 Lydmor suddenly disappeared to Shanghai for several months. Her life in the Chinese metropolis inspired her to write a piece of modern electronic pop music which will be released as her new solo album “I Told You I’d Tell Them Our Story” in fall this year.After her first two albums – A Pile of Empty Tapes (2012) and Y (2015) – which were only published in Denmark, Lydmor’s new record will be released internationally for the first time by hfn music.Lydmor has recently released her previous single “Helium High” as well as two albums with her critically acclaimed duo project “Lydmor & Bon Homme” on the Hamburg based label.