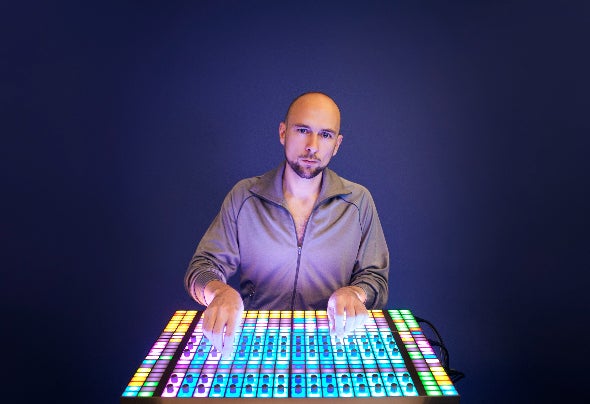 Ander: Live act, producer and tinkerer at its finest. Coming from a jazz background, Ander's interest for improvisation in electronic music developed together with his interest for new ways of live performance. Continually fine-tuning his style, Ander combines powerful rhythmic patterns with an array of rich sounds, which he bends and modulates live. Creating a flow of grooves in his performances, he continually blends one into the other, delivering a dense, narrative musical experience. In three years time, Ander designed and built his controller which takes electronic live performance to new grounds. Based on a colourful labyrinth of light, Ander plays his sets on this exclusive instrument, incorporating elements from modular systems, sequencers, synthesizers, digital workstations and traditional instruments. With his unparalleled gear, Ander plays an absolutely water-tight live act. Different, improvised, every time. Always focused on the groove of the moment, still tempting you to the next acoustic tete-a-tete. Ander was born in Hamburg, Germany. He currently lives in Zurich, Switzerland and Olhão, Portugal. Being part of the rapidly developing and high-toned Swiss music scene, Ander has been performing in numerous clubs and on many festivals since 2010. As a producer, Ander develops his tracks out of his live performances. He has been releasing music on Contexterrior/Tuning Spork, Nice Try Records, Tonspur Records, Eminor, The Crates and FEM, as well as on his own labels Unalike Music and Low Frequency Foundation.