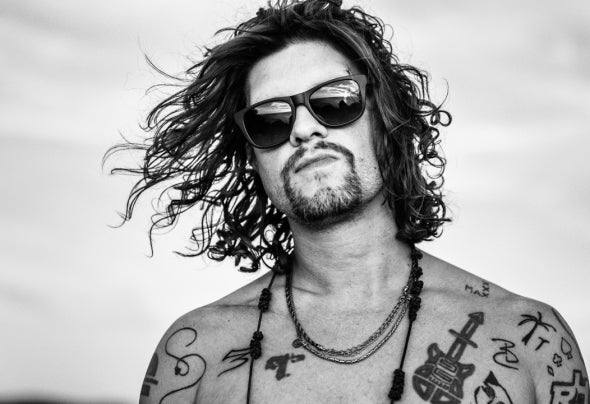 San Proper is a very strong character, and that always rubs off in his many musical endeavours. He is a famously unpredictable DJ who lays down party starting sets of house and disco, electro, afro and acid. He is also a charismatic live performer who places his own vocals and instrument playing skills at the centre of his show, whilst various bits of hardware and digital toys flesh out the grooves. And lastly, he is also an esteemed producer of often feral house and techno sounds on quality labels like Rush Hour and Perlon.This established Amsterdam artist has roots in playing guitars in various bands, is a frequent collaborator (with artists like Melon, the Mole, Mayaan Nidam and other collaborations) and always has time to support worthy talent whenever he spots it. All that means he is now a firm underground favourite who has been headlining key clubs and cult festivals for many years. As such, he is at home playing a high tech nightbox as he is a dirty basement after party. With close ties to the likes of Trouw and Dekmantel, San Proper likes to champion local stars (see his Proper A’dam Family Series for proof) but has also remixed, and been remixed by, such legends as Ricardo Villalobos. He also likes to go against the grain and do the unexpected, and as such runs his own Proper’s Cult label and is a regular on Red Light Radio with his soul show.The music he makes is always idiosyncratic from his earliest 12”s right up to his debut album on Rush Hour. It is personal stuff that contains a little piece of him—and “everything I have listened to since I was six”—in every record and always makes for standout stuff in any DJ set. Passionate and full of energy, San Proper has played on every major continent and when he does, he never fails to lay down real, raw musical experiences that never fails to be full of surprises.