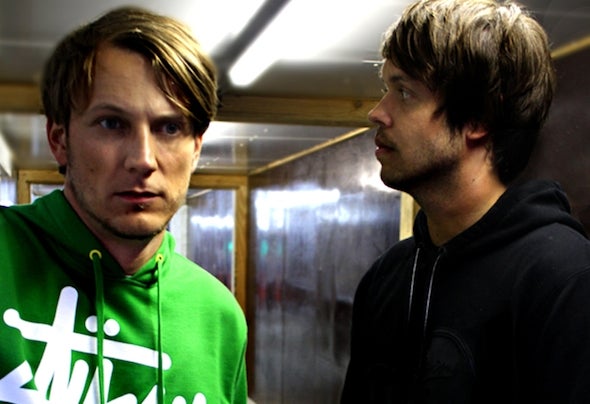 The triumvirate of Henree, Bass Tikal & LF Flow are Triad, one of the leading lights in the new wave of dance music that has captivated many listeners the world over. Since bursting onto the scene with their anthemic Drum&Bass single on Deep Soul Music - ‘Fiasco’ b/w ‘Last Gasp’ – they have built up a glowing reputation in an extremely short time as one of the most cutting edge and imaginative production outfits in electronic dance music.The Triad story is one of humble beginnings. Having always wanted to work together, the project was conceived by Bass Tikal and Henree as a little side project where they could have a bit of fun, and at the start of 2009 they came up with the layout for a track called "Spellbound". Both had separate ideas for a drum layout and the bass elements so they combined their ideas and the track was done. After that the progression was quick. They simply recognised that the way they were working together and the position that they were coming from fitted perfectly together. After this initial concept, LF Flow, who had already worked with Bass Tikal on the ‘Madmen & Poets’ project, was invited to come into the fold due to the fact that he came from a differing musical background and brought in analogue sound engineering knowledge and expertise. From this point onward, what had started as a hobby quickly snowballed into something that none of them could have originally imagined. Both ‘Spellbound’ and their second track ‘Fiasco’ received huge support from some of the biggest names in Drum & Bass such as Flight, Teebee, Loxy, Total Science and Goldie, and they realised that ‘Triad’ had struck a chord with both fellow dj’s & producers and also drum & bass fans the world over. At the same time their first deep house productions and remixes made their rounds and gained instant support by artists like DJ Spinna, Lars Berenroth, Mousse T., Marcus Worgull, DPlay, Show-B, Langenberg, Ingo Sänger and many more. They now decided to put all their other projects on hold onto concentrate solely on making music as Triad as their main priority. Their hard work together started to yield positive results very quickly, with their debut 12” on Deep Soul Music becoming one of the biggest Drum& Bass releases of 2009. From this point on, Triad continued at the electrifying pace at which it started. Not content with crafting only drum & bass, their creative imagination and expertise has also lead them to make many different genres & tempos too, from house to electronica and beyond. A Drum & Bass and a Deep House remix of British soul star Omar proved this threesomes comfort with differing genres of music and drew yet more praise from all corners of the scene and beyond. Not to forget that their remix made it on the flipside of one of the biggest house releases in 2010 - the Henrik Schwarz Remix of Omar’s “Feeling You”. It is certain that the Triad name will be a permanent fixture in all forms of electronic music over the coming years, and that their already sparkling reputation will only be enhanced. They stand testament to the positive outcomes of sharing ideas and knowledge and are certainly proof that 3 heads are better than one….