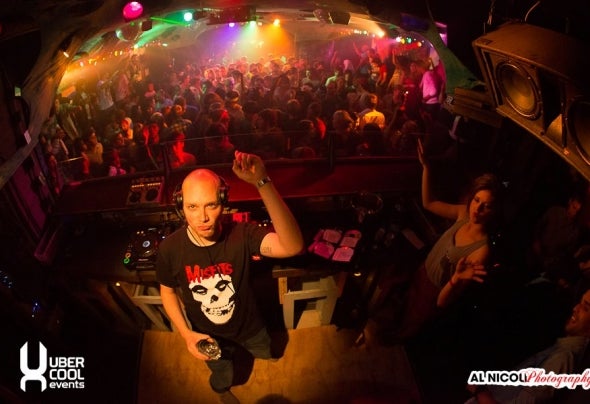 Artist Bio A true DJ at heart with many years experience under his belt, Dutch DJ/producer Nymfo has recently been making waves with his skills in the studio as well as on the decks. Standout singles for Commercial Suicide and Critical Modulations have made his name synonymous with tough, techno- tinged dancefloor drum & bass, adding to a reputation built at his own nights Red Zone and Breek in Eindhoven. Now in 2011 he’s pushing his sound further with releases set for Commercial Suicide and Metalheadz as well as further collaborations with Black Sun Empire, Klute and S.P.YTwice voted ‘Best Dutch DJ’ in the past few years, Amsterdam-based Nymfo (aka Bardo Camp) may be no newcomer to drum & bass but has recently established himself amongst its most promising production talents. With a versatile and infectious style, his tracks have already won support across the scene from the likes of Goldie, Friction, Fabio, Hype, BSE, Teebee, Klute, Doc Scott, S.P.Y, Commix, Kasra, Logistics and more“I started as a DJ when I was 14, but soon after that I started to promote as well. I liked this from day one already. I wanted to produce, but was very lazy most of the time. After I met Icicle, the producing part was getting more interesting for me. He gave me lots of tips and tricks, so it was easier for me to start.”Nymfo’s breakthrough came in 2007, with releases on Shogun Ltd, Renegade Hardware and a 12” for Critical alongside Icicle. Solo releases for Critical and Crunch soon followed, with ‘Franky Mountain’ (alongside Icicle) earning a prestigious Ram release on the ‘Dimensions 3’ EP. Further honing his sound and remaining versatile, Nymfo stepped up with singles for CIA, Inneractive and 31 Records before really hitting his stride in 2010. With a potent combination of powerful beats and hypnotic techno-influenced grooves, a guest appearance on Black Sun Empire’s LP (‘Kempi) plustwo strong singles for Commercial Suicide (‘Matchstick b/w Bionic Fingers’) and Critical Modulations (‘Try To Forget b/w Autonomous Robot’) set dancefloors blazing worldwide and marked Nymfo as a name to rememberAn accomplished DJ with a diverse selection, Nymfo has captivated crowds at festivals such as Lowlands and toured worldwide to destinations including New Zealand and South Africa. With years of experience promoting his own events, he’s held residencies at Red Zone (which he ran together with Martyn for over 10 years) and Breek in Eindhoven yet Nymfo remains keener than ever to reach new places and take his music further:“A 100% dnb crowd is wicked of course. But there are lots of people that don’t know the genre - that’s why I like it to play a party with a mixed up crowd and hope to convert some people to the lovely music that is dnb”Things are looking bright for Nymfo in 2011 with more releases due on Commercial Suicide, Metalheadz, CIA, Samurai and Dispatch plus collaborations with Black Sun Empire, Klute and S.P.Y