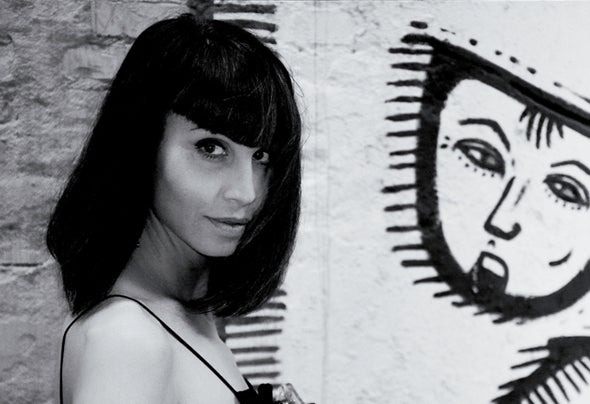 Surprising, experimental and always breaking boundaries: there is no doubt that Julie’s music has brought new life to the electronic music scene. Since the age of 10 when she first started playing the violin, Julie has been continually experimenting with this classical instrument. Born and raised in Las Vegas with a jazz musican father, Julie was always surrounded by bee bop swing which gave her an infallible feel for rhythm at an early age. Having italian roots, Juliewas always fascinated by European culture so she decided to move to italy in 1995. During these musically golden years, Italy was a mecca for great underground housemusic and Julie became absorbed in the scene, and started to buy her own collection of records. Names like Todd Terry, Frankie Knuckles, Kerri Chandler or Jeff Mills were heard weekly. She was already known on the scene for improvising and accompanying dj’s with her electronic 5 string. In 2002, Julie was asked by Ivan Iacobucci to collaborate on her first release “Blinded” and it launched her dj career. Shortly after this,she became the resident DJ at the historical clubs, Peter Pan and Echoes in Riccione, Italy. Her innovative violin style and feel for rythm earned her bookings in landmark venues around the globe including Coocon, Frankfurt, Cielo NY, Rioma, Mexico city and Katerholzig Berlin. After residing 13 years in italy, she felt she needed new inspiration. Living the gipsy life of a dj she stopped one year in London and then finally discovered Berlin, the city that gave her the freedom to mature her musical taste and become the innovative artist that she is today. In the last years of her musical development, she has fused the 5 string electric violin with deep stripped down house/techno music and created a range of original and surprising sounds in herlive/ DJ sets and productions. Whether it is transforming pizzicato into dark sub basses, creating sweet synth sounds out of a violin loops or simply making a live orchestration on the fly, julie is continuously creating new and unique sounds and combines these elements that will illuminate you with an unforgetable hypnotic experience. Julie is also the mastermind behind ‘Sol Asylum’, a Berlin- based party that has hosted some of the most interesting and refined underground electronic artists such as Audio Werner, Ion Ludwig, Seuil, Miss Jools, Anthea, and Dana Ruh. This crazy affair was created to host artists and give them a platform to have complete freedom of expression. Julie’s hard work and determination has not gone unnoticed. In fact, her productions Last Tango and Arazmataz gained support from DJs such as Villalobos, Loco Dice, Luciano and Tobi Neumann, and the appreciation of her work from colleagues and connoisseur's continues to grow. One of her latest 6 track releases on Little Helper showcased her talents once again for being an inspiring performer and producer who remains true to her soul.