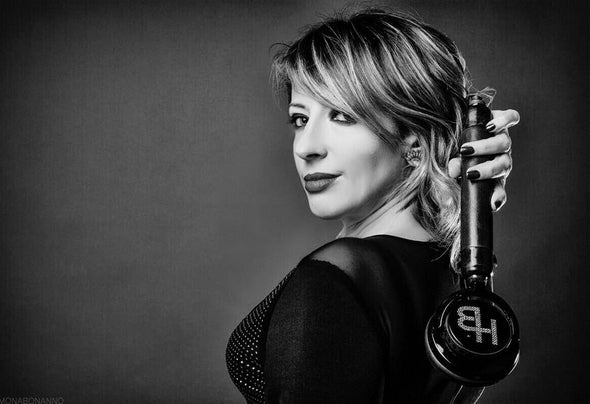 Helen Brown, one of the most brilliant female Dj of the present Italian panorama, has been a disk jockey in the house music scene since 1993. Helen began performing professionally in Sicily, in Taormina, many clubs of which are associated with the popularity of the seaside resort itself. After getting a degree in law, Helen starts working in all of the Sicilian clubs performing a wide variety of pieces of music featured by a cutting-edge sound interwined with energetic and dynamic vibrations. Helen’s performances are set in a decidedly eclectic atmosphere where musical styles ranging from electro club, tech house to progressive are blended in a trendy and unique way so that the dance floor is heated as she sets to work on. Her Dj sets have made her popular with several clubs such as Matis (Bologna), Luna Glam (Sardinia), Charlie (Cagliari), Nucle’ (Bari), Mythos (Avellino), Bunker (Lignano), Tsunami (Cagliair), Prima Donna (Pistoia, Sketch (Merano), Villa Prugnolo (Bologna) and since 2007 she has been performing in a huge number of European clubs such as Opera Club (Warzaw), club Zrda (Cracow), Love Club (Ibiza), Le Bakoua’(France), Privilege (Tunis), Liquid club (Malta), Krylia club (Russia), Legend (Biel Swiss), Barrio Habana (Arhnem- Holland) and so on. In addition, Helen exhibited her own Dj setting to major National events like The motor Show in Bologna, My special car in Rimini and Fiera della Moto in Milan. Also, Helen received a favourable written assessment of her work in prestigious magazines , for example, Jocksmag, Kult, Trend Magazine and many others. In 2008 she made her debut as producer and remixer cooperating with plenty of national and foreign labels: FKJ Music Records, Baroque Rec, and many more; and proved to be impressive for her elegant and peculiar style.