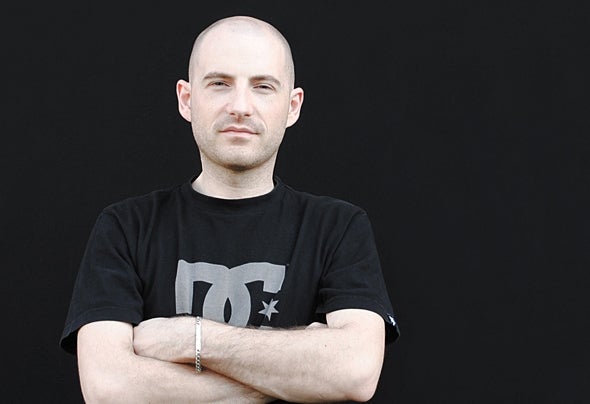 Dj Puk was born in a small town in the northern Italy. He began to play his turntables when was 16, and at the same time he started to express his creativity as a record producer. Cubase was his first love, and since then, he has never stopped using it.Nineties were fundamental to him, since he was able to distinguish himself from the other local Djs, who were hold to commercial and radio-broadcasted music. He developed his passion for the European Techno thanks also to the work than takes him to travel around Europe.Fundamental to him was his encounter with the Djs Phil Delcorso and Renton, with whom he has played many times in several clubs of the province, promoting alternative electronic parties.Cooperating with Renton, He began a new project called ‘David Hofmann’, chiefly focusing on neotrance, electro and Idm music. In 2009 release his first record “Jade”, this track is a neo-romantic vision of techno, is an 8 minutes voyage through both hypnotic and emotional melodies injected with pathos, and inclined to the dance floor. In 2010 publishes several EP and Remixes cooperates with Smiley Fingers (UK), Orion Records (IRL), Aquavit Records (ESP) till to Italian Mazoom lab. In 2011 appears for the first time on a vinyl label near John Tejada on consolidated Aquavit Records. Under the pseudonym David Hofmann the duo release a single in the compilation “Reversion” of Wide Angle Recordings, in 2012 begins a new adventure as a label manager of the newborn Detuned Recordings. His tracks are receiving increasingly positive feedback from artists such as Funkagenda, Osunlade, Murray Richardson, Dosem, Israel Vich, Jewel Kid and many others.