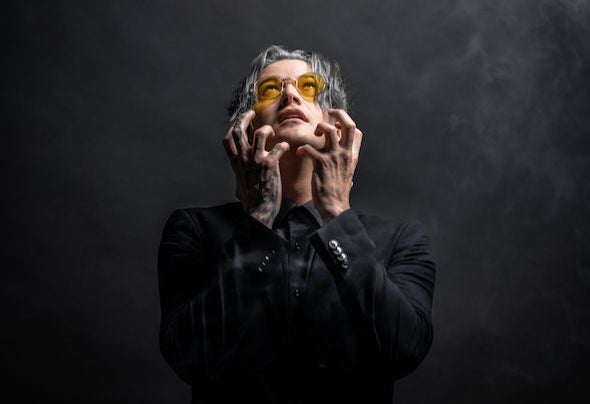 Born David Lee Crow in Phoenix, Arizona, Ghastly’s humble beginnings took place on his family’s dairy farm built over 100 years ago. From childhood he was an entertainer and an entrepreneur - you could find David working on the farm, giving guided tours for the field trips that happened every day, to selling his own toys and T-shirts on his days off. Despite his upbringing, David knew from early on that music was his life’s calling as he began recording his own music at the age of 12. As a teenager, he started a death metal/grindcore band called The Irish Front, where he performed as its vocalist. Their success allowed him to tour the country. After performing live, he was hooked. Like many smaller bands do - they decided to go different directions, David took the plunge as a solo artist: he bought a van, saved up $1000, said goodbye to his family and friends, and moved to Los Angeles to pursue his music career with no connections - just a stubborn dream. After years of trying and failing and at one point even losing everything and having to return to the farm and start over - Ghastly found his footing in the music industry and the rest is history. Ghastly’s music has evolved over the years into a multi-faceted discography ranging from tugging at the heart strings to breaking vertebral columns. His eclectic taste in music is shown through the swirling diversity of his sound. The amalgamation of which has become a secondary project known as “GHENGAR” - where Ghastly is able to completely cut loose and perform his most aggressive sets rooted in his love for metal music - whereas Ghastly could now be completely focused on groovy house beats and melodic bass.