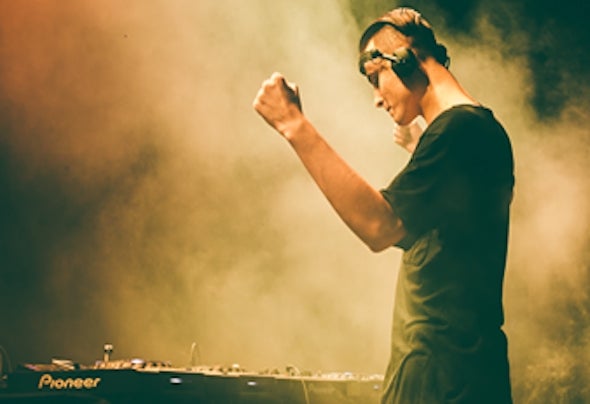 Mackenzie Johnson, better known as MAKJ, uncovered a passion for mixing and DJ’ing at only 15 years of age. While living overseas in China as a professional racecar driver, the teenager grabbed hold of his first set of Technics 1200 Turntables. As he experimented with the new equipment, Johnson also took advantage of his foreign exposure and critically studied the technical nuances and styles set before him in the most popular overseas clubs. No longer would DJ’ing bejust a newfound passion for MAKJ; it soon turned into a thriving career path. As a 17-year- old Johnson made his way back to the United States and he returned with a unique outlook and greater ambition than ever before. The insight Johnson acquired abroad gave him incredible local momentum; Johnson found himself being repeatedly invited to DJ countless local University and Community College events and concerts. It was at this age that MAKJ also received priceless DJ’ing tutelage from one of the best in history, the late great DJ AM himself, who skilled MAKJ in the art of scratching over the course of several one-on-one lessons. Honing and perfecting his skills over the past several years, MAKJ has DJ’ed at some of the premier venues in the country including Playhouse, Avalon, Dim Mak Studios and Supperclub in Hollywood, Marquee, TAO, and Tryst in Las Vegas, The Grand in San Francisco, Lavo and 1OAK in New York, LIV in Miami, plus recent shows in Montreal, San Diego, Columbus, Costa Mesa, Santa Cruz, and Cabo San Lucas. He also performed on last summer’s IDentity Festival in Boston, Washington, and New York, and has played direct support to greats such as Avicii, Armin Van Burren, Steve Aoki, Morgan Page and Wolfgang Gartner. Johnson’s creativity and diversity as an artist have now carried over into the production field and his works have deservingly awarded him much critical acclaim and positive reception. His edits, bootlegs, and remixes have received immense support from renowned artists such as Hardwell, Tiesto, Steve Aoki, Afrojack, Fedde Le Grand, R3hab, Chuckie, Avicii, Laidback Luke, Adrian Lux, Swanky Tunes, Steve Angello, Sebastian Ingrosso, and many others. With the support of these greats in his pocket, MAKJ is now venturing off into the realm of original production; he has many fresh new tracks slotted for release over the course of the next year, including several that Robbie Rivera has hand picked for his Juicy Music label. MAKJ has also collaborated with Robbie on a very well received remix for Nari & Milani/Maurizio Gubellini and the two will be collaborating on an original track in the near future. Finally, in 2013 MAKJ will be making his debut on Hardwell’s Revealed label, a longtime goal of Mack’s. Additionally MAKJ will soon debut a new weekly radio show on iHeartRadio’s Evolution channel which can also be heard on 101.7fm in Boston. At only 22 years of age, Mackenzie Johnson has achieved an almost unfathomable amount of success. His dedication to his craft and ambition to surpass any and all competitors will further propel MAKJ higher than he could ever have imagined.