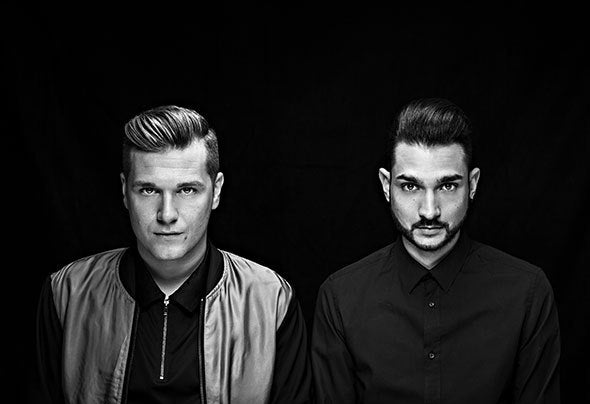 Both living in Zurich, each regularly performing as DJ's, andboth named Adrian S., perhaps it was inevitable that AdrianShala and Adrian Schweizer would meet in 2008 and form anear instant friendship. But it was the professional bond thatfollowed for which we're lucky, a bond that would help themto ascend within the underground dance music communityas the production and DJ duo known as Adriatique.Inevitabilities aside, the basis of any great partnership ishow one complements the other, which in the case of theAdrians, was evident from the outset. While one had honedhis musical chops with hip-hop, 90's dance and house, theother dwelled in deep melodies and European techno. Onemay gravitate towards the studio while the other can't resistthe temptation of the booth. One is blonde, the other?Colloquially known as "dark-haired Adrian." And it is the sumof these parts that gives us what we now know so well. Inthe world of dance music, where producers go out and DJ,and some DJ's may dabble in producing, their partnershiphas mastered both while bridging the perspectives of twovaried perspectives, bound by the ultimate desire to forge aunique sonic signature and connect with the audience thatshares in their deeply held belief that music is meditation.Forging relationships with artists and labels that shared intheir sensibilities, Adriatique has released on Z urich'sCityfox, LA's Culprit, New York's Wolf & Lamb, London'sSupernature, and most frequently, Hamburg's Diynamic.Building upon their hard work and an increasingly aware andreceptive audience, Adrian and Adrian enjoyed a seminal2013, releasing standout tracks while maintaining a tirelessworld tour schedule. They debuted on RA's list of Top 100DJ's and their exclusive podcast was voted Mixmag Mix ofthe Year. 2014 has only seen a continuation of this trendand their ascension.But ultimately, it is Adriatique's presence in clubs in allcorners of the globe for which they may be most loved, ajoint approach to DJing hard to put to words, but may bedescribed as the work of true track selectors with their ownsonic signature: at once varied yet cogent, creating ajourney from choice tracks that are techy or deep,contemplative or energetic, tension and release that leavesjaws on the ground and dancing legs sore. Stay tuned forwhat they bring next.