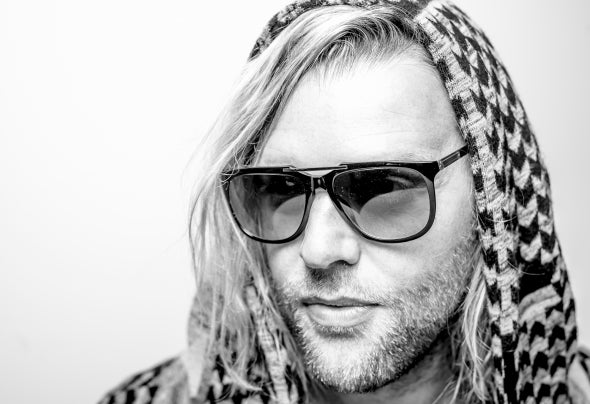 Cagedbaby is back in 2014 with a highly anticipated new album the follow up to the now cult 'Will See You Now'. Originally discovered and signed by Fatboy Slim after Thomas handed Norman a CD at the Miami Music Conference a decade ago, Cagedbaby has been an staple of the dance scene ever since. Taking a hiatus in 2009 to concentrate on different productions, this is a welcome return to one of the the worlds finest electronica and nu-disco pioneers. Sat in his ancient well-house studio in deepest France, Cagedbaby or Thomas Gandey to his friends put the finishing touches to the new album that took him 3 years to make. 'I started the album when i was living in Berlin and finished it back at the Ranch in Bordeaux, I wanted to make an album that i could take live again, this is a a one man club show, think Bowie meets Maceo Plex' , Its a unique combination and Thomas certainly has the background to substantiate these claims. His hot buttered Balearic blue eyed soul, which effortlessly evokes the late 80s acid house meltdown fused with classic 90's bass-lines and his own delicate but twisted vocals has spread musical sunshine all over Glastonbury, rallied the troops in Ibiza; his electronic tales of melodic bliss being the perfect starter for The Chemical Brothers tour; that was him and his merry band making whoopee at Japan's Mount Fuji festival; and if you were lucky enough to have been down under, you might have caught a glimpse of the all-singing, all-dancing 'Baby experience with fellow genre busters LCD Sound System and Soulwax. When i'd spoken to him he'd just finished a 3 week tour of Japan supporting Fatboy Slim in Japan. Of course, none of that would have been possible without the kaleidoscopic sonic tonic that was Cagedbaby's debut album, Will See You Now, released on Fatboy Slim's Southern Fried imprint - Tom's a Brighton boy, so it makes perfect sense - its playful mix of seductive electro-pop, subtle techno rhythms, laid-back party music and snippets of 80s power chords, made it irresistible to all who stumbled upon it. Pleasingly, this hot fuss began to grow, stealth-like, as the summer gave way to autumn as by year's end, away from the hyperbolic glare of the vacuous fashion police, Cagedbaby, by sheer force of word-of-mouth was finally beginning to assume his rightful position as the people's new boy wonder of dance. This was confirmed when not only Rough Trade record shop placed Will See You Know in its Top 20 albums of 2005 and Pete Tong discovered its unfettered joys, something that culminated in the Radio One godfather seemingly making it his personal crusade to spread the word being played for 14 weeks in a row on Pete's legendary Friday night slot. Cagedbaby went on to do an essential mix for the show. So to recap that lifetime: born in Brighton to less than hippy, parents, Tom was torn between the sea and music as a child. His granddad once conducted the Royal Philharmonic Orchestra, while his dad ran a fish merchants. He once joked that the only way to reconcile the two family traits would be to transform himself into 'Simon Le Bon.’ Cagedbaby has also remixed the likes of Sugarbabes, Grace Jones, Hybrid, Analog People In A Digital World, Editors, Temper Trap, Olly Murs, Tracy Thorn, Empire Of The Sun, Kylie Minogue, Will Young, E'Voke, Ashley Beedle, Orbital, Armand Van Helden, D.Ramirez, Fat Boy Slim, David Bryne, Shirley Bassey, Ocean Colour Scene, Erika Jayne, X-Press 2, Benny Benassi & Shinichi Osawa !