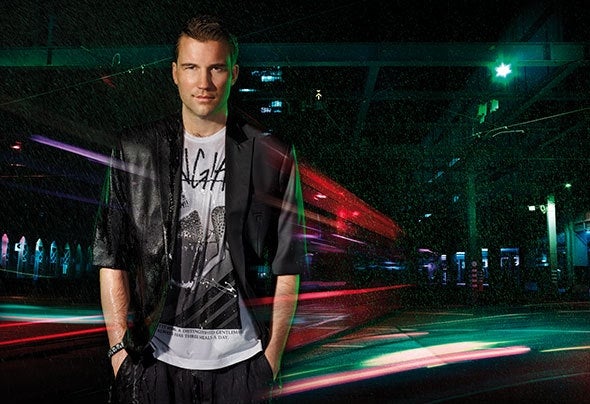 With more than 2,5 million sold albums, 38 gold awards, 6 platin awards, 2 double-platin awards, 2 triple-platin awards and owning the record label „Houseworks“, DJ Antoine is the internationally most successful DJ of Switzerland.His career officially took off in 1995, when he opened his club called House Café in the city of Basel. This club is the benchmark for the progress of the whole scene in Basel and the cult-parties are still in fond memories. After a short trip into the Swiss Hip Hop scene, DJ Antoine had quickly switched genre, getting hooked on the Pumping-House-Wave. In 1998, he released his first album “DJ Antoine – The Pumpin’ House Mix”. 1999 “Houseworks 1” won the first gold award. After that, things started to move very fast. Until this day, DJ Antoine has produced 51 CDs, strongly establishing his music and himself in the music and clubbing scene. Since 2003 he has been hosting his own weekly radio show, which is broadcasted by radio stations all over the world.In 2006, DJ Antoine achieved his international breakthrough with the album “DJ Antoine – Live in Moscow” and the single “This Time”. Ever since, he has been a highly demanded act in popular and trendy clubs all over the world. Gigs in New York, Chicago, Miami, Montreal, Moscow, Dubai, Bangkok, Oslo, Vienna and Cairo have turned into a regular but exciting part of his everyday life. Acknowledging his international success, All Around The World Records, the electronic music label owned by Universal Music UK, Blanco y Negro Spain, Happy Music France, Emi Music South Africa, Ultra Records USA and Kontor Records Germany signed the single “This Time” in 2009.The many awards he won in the recent years prove that DJ Antoine is one of the best in this industry. 2001 he won the Ericsson Dance Music Award for the best and most successful artist of the year 2000 in the category „House / UK Garage / Progressive House“. In 2008, DJ Antoine created a stir with his sociocritical album “DJ Antoine –Stop!”, on which he openly spoke out against juvenile violence, calling for more civil courage. In spring 2009, the record was priced with the Swiss Music Award for “Best National Dance Album”. The following year, he defended that title with his CD “DJ Antoine – 2009” and, on top of that, received the Swiss Prix Walo. In 2010 he achieved his biggest success in Switzerland so far: For his album “DJ Antoine – 2010” he was awarded with a platinum record. This platinum record was also nominated for this year Swiss Music Award in the category “Best Album Dance National”.In the studio DJ Antoine works with his long-term business partner Fabio Antoniali also known as Mad Mark. Well-known musicians such as Mary J. Blige, P. Diddy, Pitbull, Cindy Lauper, Robin S., Roberto Blanco and Ivana Trump have had their tracks exclusively remixed by the two artists. In 2010, DJ Antoine produced songs for Timati, Snoop Dogg, DJ Smash and Bob Sinclar. That same year, the charismatic House-legend Mr. Mike joined the team as a vocalist, also accompanying the DJ to selected performances.Another highlight of his career is now the first collaboration with Timati and Kalenna Harper (Dirty Money) for the hit single "Welcome to St. Tropez", which was released in Germany and Austria by none other than the dance label Kontor Records.DJ Antoine keeps setting new trends with his music, attracting worldwide attention to his brand. Labels like Maurice Lacroix, Perrier-Jouet „Belle Epoque“ champagne and the Swiss custom tailor SuitArt all trust in his image. For VIP-Events, DJ Antoine has had the chance to work with nameable partners such as Sony Ericsson, Campari, Moonlight, Edo Popken, Crysler, Dodge, Maybach, Cadillac, Moet Hennessy, J. Lindeberg, Paco Rabanne and the German TV station Pro7.Alongside his work as a DJ, Antoine Konrad manages his own production and booking companies Global Productions GmbH and Global Bookings. For his VIP- Events, he regularly creates extensive and individual concepts, in tune with the clients and guests needs and wishes. His exclusive event concepts represent lifestyle and luxury and he inspires his customers with his ideas. His team currently consists of ten employees, all based in Switzerland.