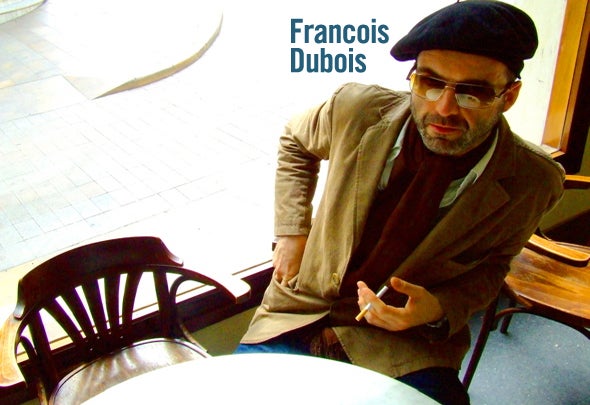 Just a normal guy trying to make his way in this big, bad world, providing some aural relief from the day-to-day pressures of l'existence. Younger, better-looking brother of Frank Dubois and no relation whatsoever to Spanish dude Patrick Dubois (though would be up for a beer and a chin-wag with him). Distant cousins of Scottish technocrat Funk D'Void, they spent time as kids together growing up in the slums of Glasgow and the country-houses of Sweden during the summer. The Dubois family moved from the hustle and bustle of the choking metropolis that was Paris and settled for the subtle elegance of Perpignon in southern France, and it was there he cultivated his taste in music, fine wine and cuisine before taking up the piano at the tender age of 6. His family were all musicians so the need to take up an instrument was a no-brainer. After numerous stints busking for money during his teenage years he became the in-house organist at the local picture house, providing background music for a wealth of classic silent movies and it was here where he honed his craft. Alas after the emergence of "Talkies", young Francois found himself out of a job again so it was then that he met his first mentor, a street performer named Walter Boem whose living was made by the rhythmic percussion of two kitchen spoons clacked together like two spanish castanets, performing on the majority of pavements in the city (his favourite spot was outside the cinema where young Francois worked). It was from this man that he learnt the importance of rhythm and the intricate part it would play in his future productions.