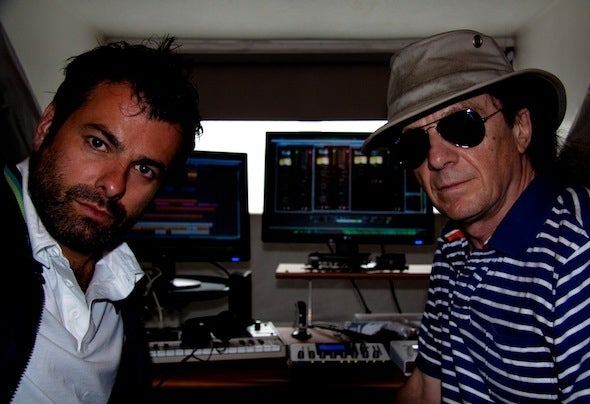 No Logo is a special collaboration between Steve Miller, the super producer behind downtempo sensation Afterlife and renowned, versatile DJ and long standing Cafe Mambo, Ibiza resident Pete Gooding. Their tracks have featured on over 150 compilations worldwide including: Cafe Del Mar, Hotel Costes, Cafe Mambo and many more. As far as releases go No Logo's debut single was on Urbantorque with 'Dark Star' which gained support from: Sasha, Laurent Garnier and many other high profile names. Their second single 'Party Animal' was on Nang Records this went straight to number 1 on Juno Download and again gained strong DJ support as well as several plays on BBC Six Music. Chris Coco's Melodica Recordings was responsible for their third single with a Balearic cover of Eurhythmics’ classic 'This City Never Sleeps', the duo then returned to the label as promised for a startlingly accomplished full length album. No Logo started work in 2005 after the pair were in contact after Pete regularly compiled Afterlife tracks on his Cafe Mambo compilations and now in 2012 No Logo are on their second album, so far they have collaborated with Dirty Vegas lead singer Steve Smith on 'Matter Of Time, Brooklyn based rapper River Nelson on 'Now We Try' as well as 2 new instrumentals, firstly 'Vibrafone' featured on Cafe Del Mar Volume 18 and 'Treehouse' so far featured on He'd Kandi's Served Chilled.