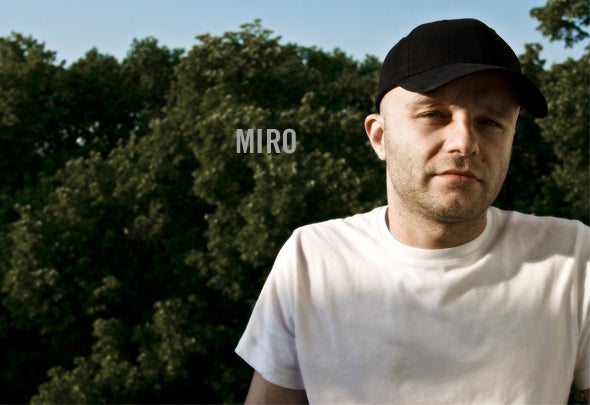 Born and raised in Frankfurt / Germany, Miro started to get involved into techno back in 1991 when Sven Vaeth was resident DJ in the legendary OMEN Club, which Mr. Pajic visited every weekend until the mid 90's. With borrowed equipment (a TR-606 and an MC-202 + a little Spirit Folio mixer) he recorded his very first demo on casette and passed it to the notorious guys from PCP (Planet Core Productions), which were quiet big back then and very involved in the world of techno. (Makers of 'Frankfurt Trax' series as an example) They released 2 tracks on vinyl and his first 7' called 'MIRO1' was born. That was in 1993. The split up of 'techno house' into all the genres such as trance, hardcore, gabber, breakbeat etc and being stuck to the PCP clan, sucked him more and more into the harder sides of the techno aftermath. Miro started producing alot of records and became the second main producer next to Marc Acardipane (The Mover, Mescalinum United, Ace The Space etc), who's reputation was very high. Miro with his dozens of aliases has created some of the biggest hits in the hardcore sector and is definitely a real legend within that scene. With about 70 vinyl releases produced by Miro, the PCP era was closed near the millenium. Besides working on some harder productions it was getting a bit quiet until he moved to Berlin in 2006. His taste and influences have changed alot. Since then he hooked up with several Berlin and USA based artists and released on labels such as Klickhaus, Kiddaz.fm and Tora Tora Tora - a beginning of a new phase of his life as a musician. By now he has found his very own and unique style within the Minimal Techno sector. Miro's productions are mainly nothing for beginners but mostly carry a deep heaviness and psychotic drug atmosphere! after 15 years of being involved and knowing what it means to fight for his dreams, his name and reputation is on a rising path in this gigantic ocean of techno today! discography: http://www.discogs.com/artist/Miro+Pajic