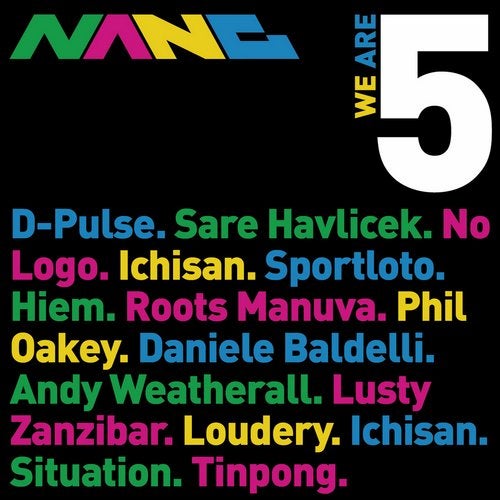 Rewind to 2009..We had just started Nang Records; we needed a motto and a call-to-arms mission statement. The best we could come up with was, "We are doing it for the love, that's for sure". Although we may have made that up on the spot, looking back now we think we were bang on. Being an independent record label is the sweetest of labours. We gave up trying to break even years ago. It is hard to believe we started 5 years ago (and a bit), it just seems like yesterday. Lots of ups, a few downs, a few "ones-that-got-away", plenty of laughter, some great new buddies and of course, lots of great tunes.

Big problems, big problems. How do you encompass 5 years of Nang and over 600 tracks into one single compilation? - So many favorites, so many touchstones to points in our history. In the end the formula was somewhere along these lines: Take a few tracks which have that distinctive Nang vibe and flavour, take a few tracks which the fans liked (and bought) and then take a few pivotal tracks in our timeline.

Our first ever release was from an insanely talented Russian band called D-Pulse. Downtempo jazz-funk-disco. We opened with it back then and it stands the test of time proudly 5 years later. One of those pivotal moments in Nang's history was hearing "Lazy Summer" from Slovenian producer Sare Havlicek. The first listen to those lush grooves and slumbering synth-funk was a moon-landing "where-were-you-when-it-happened" moment for us (it was Yamacraw Beach, Nassau for us when his demo popped into our inbox). Talking of lazy grooves and ponderous sounds there is nothing quite like Irishman Lasertom and his slo-mo build-up of burbling grooves.

Bottin's "Tinpong" project provided 2011 with a fine highlight. His "New Religion" cover may not have much in common with the Duran Duran original but the Marcus Marr mix just oozes a sweeping, additive funk. Big buddies of Nang are the West Country based Situation, our favourite tune from them is the ever so large and chunky "Barcelona". All present and correct. No Logo (made up of DJ Lord Pete Gooding and Chill Lord Steve Afterlife) are next up with their saucy French-accented vocal stomper "Party Animal". They are joined by Argentinean pal "Toomy Disco" in the remix, hitting the spot with his bass-guitar driven reworking. We are not sure why such a disproportionate amount of our artists seem to hail from Slovenia but we are sure glad to know them. Camera-maestro Ichisan and DJ pal Nakova team up with another Nang favourite Lusty Zanibar for their synth-happy romp "Pionir". Whilst (of course) not forgetting that jangly, catchy guitar riff.

We take a trip over to Siberia next with Sportloto. We love his sweeping key-pads, chord changes the way he makes synthesizers sound so lush. "Will I" pairs his keys with the sultry vocal of UK based songstress Michelle Bee. Next up Italian analog synthesizer fan Brioski, pairs up with the Stafford based Dr-Doolittle-of-the-synthesizer, Andy Meecham. He talks to the synths and they talk for him: big burbles, big oscillators and filters galore for the galactic sounding "Radio Anatomy". It's off to Sheffield for our next track with our really- cool chums, Hiem. The steel city duo pair up with Roots Manuva for the lifestyle commentary "DJ Culture". Our man James Bright from Manchester layers it up with multiple helpings of expansive groove.

To conclude the tail end of the album label head honcho Loudery dusts down the analog synths with Simple Minds legends Mick Macneil and Derek Forbes, covering the demo version of their 1984 "Book of Brilliant Things". We like to round things off with a smile. So it's all aboard the Wizz-Air jet to Ljubljana for a jaunty, tongue-in-cheek cover version of Queen's "Football Fight".

As well as the sparklers above you didn't think we could get away with proceedings without a few remixes did you? - Of course not. First up we are off to Sheffield with the pairing of Human League singer Phil Oakey and Hiem. Their "2AM" cracker gets a blippy house re-rub from scene stalwart Si Begg. Italian DJ legend Daniele Baldelli and DJ Rocca get their "Real Like the Music" vocal house groover remixed by London based office-dropper-inner Pete Herbert. Big grooves abound. Slovenian italo disco meister Sare Havlicek is next up with the lead single from his second Nang album "Vibe on You". Once again James Bright helps us out of a tight spot with a big rumbling disco house version. A celebration of all things Nang would not be complete without (another) remix from our first ever release "More" from D-Pulse". Slovenian Ichisan steps up to the plate with his trademark Adriatic disco-house shiner.

So there you have it. We plan to keep putting out music we adore. We are scheduled up to 150 releases and there a plenty of nifty projects in the works. Here's to the next 5 years,