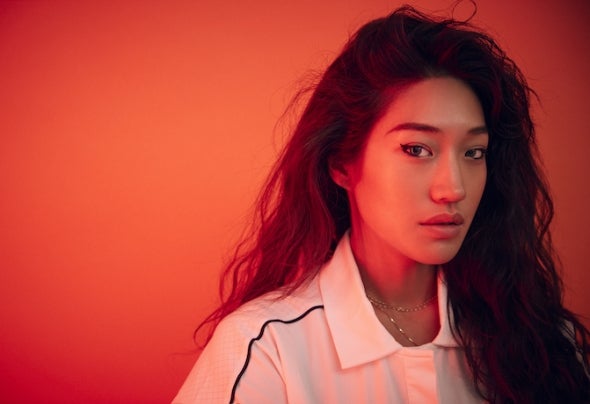 The title of Peggy Gou’s celebrated 2016 EP "Seek for Maktoop", takes its name from the Arabic word maktoob, derived from the concept of destiny. Gou, born in South Korea, has already glimpsed any number of potential destinies; designer, model, pianist, writer, editor and stylist. However, as time passes and trends fade, a constant, electronic pulse has proved irresistible to the DJ and producer since childhood.To say the past few years have been busy for Peggy Gou would perhaps be an understatement in a scene loaded with overstatements. Prolific in the studio, and in turn, behind the decks, 2016 saw the release of no less than four EPs across three labels. Her two-part ‘Art Of War’ series on Rekids, for which Gou also designed the distinctive artwork and commissioned challenging, inventive remixes from both Galcher Lustwerk and Terekke, was interspersed with a contribution to the coveted ‘Phonica White’ series of 12”s. Gou could once regularly be found digging in the legendary London record store, and the result, 'Day Without Yesterday' / 'Six O Six’, was a pair of offbeat club anthems that led neatly into the aforementioned ‘Seek for Maktoop’ - released on Ninja Tune imprint Technicolour Records - a record on another altogether different, no less atmospheric house tip, celebrated on Resident Advisor for its “sparkling groove”.This combination of playful curiosity and open musical experimentation - not to forget her signature, MPC-led rhythms - have already contributed to Gou’s rise. Her eclectic record bag has resulted invitations to play gigs across the globs, in clubs including De School, Sub Club and Panorama Bar, and with appearances at scene-leading festivals such as Les Nuits Sonores and Dekmantel. Both her club sets and a growing vault of online mixes speak fondly to an open ended musical philosophy, complimenting a style that can veer seamlessly and creatively between pumping techno, playful house and more abstract compositions.Of course, Peggy Gou isn’t the only DJ to lay claim to such a diverse range of influences, from J Dilla to Patrick Cowley, the Yellow Magic Orchestra through to DJ Sotofett. But few filter such inspirations from such a unique angle, energised by dance music's rich and diverse history, herself staking a personal claim with refreshing curiosity and undeniable style.In 2018 Peggy returned to the studio, kicking things off with a brand new EP “Once", released via Ninja Tune on 2nd March. Drawing high praise from the likes of NPR, Pitchfork, Billboard, The Guardian, Vogue and FADER. Peggy also landed on the cover of Mixmag, graced stages at Coachella, Fuji Rock, Dekmantel and Field Day, and was invited to join BBC Radio 1’s Residency. The EP also spawned the anthemic ‘It Makes You Forget (Itgehane)’, which has been a staple on dancefloors around the world in 2018, its magnetic appeal growing and intensifying throughout the year. The track has been hammered by everyone from Black Madonna and Ben UFO to Gilles Peterson, named as DJ Magazine's ’Track of 2018' and has also been shortlisted for Annie Mac’s “Hottest Record of 2018” on BBC Radio 1. To round off the year, Peggy has invited Jamal Moss, I:Cube and Jay Daniel to rework ‘It Makes You Forget (Itgehane)’ and the resulting remixes - released digitally on 28th November and on 12” white label in December - are outstanding. Moss (aka Hieroglyphic Being) draws on the deep musical heritage of his hometown Chicago: house, EBM, Industrial, Avant-Jazz and Noise, with stunning results. The highly respected Frenchman I:Cube (Versatile) whose sleek production has consistently inspired Peggy crafts a spacey, perfectly weighted remix and a mutant dub, whilst Detroit resident Jay Daniel (Watusi High, Technicolour, Sound Signature, Wild Oats) deconstructs the groove to create a sublime sparse, broken funk track.