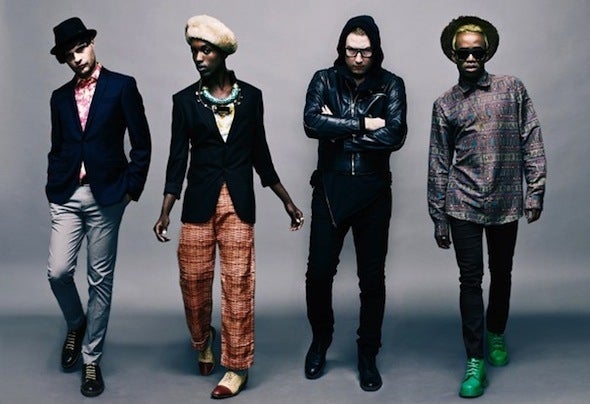 Deep inside the recesses of a sprawling, 19th century warehouse complex in Toronto's gritty-but-rapidly-gentrifying Parkdale neighbourhood, an urgently driving bass line echoes through a maze of hallways. If you know which unmarked door to open and which dark staircase to climb, you'll hear the relentless pounding getting louder and the eerie melodies coming clearer into focus. Inside their clandestine studio you'll find Azari & III buried in a throbbing groove, seemingly oblivious to a visitor. (Alphonse) Alixander (Lanza) III wheels his chair back and forth between the mixing console to the racks of outboard gear behind him, minutely and obsessively tweaking the Neve EQ of a beat coming from an old 12bit drum sampler, one he bought earlier that day. Behind him, Dinamo Azari is playing a menacing yet oddly beautiful melody on one of the many synths scattered around the cluttered dimly lit room, completely lost in the moment. Slouched on a couch, thin Nubian front man Starving Yet Full hums the beginnings of a hook quietly to himself in a soft falsetto. Feeling more sure of his idea, he lets loose with a soulful riff on a few words that immediately shifts the mood of the emerging skeleton track. With a paranoid screech the piano booth door opens and Fritz Helder dances his way back into the room, notebook in hand, immediately launching into an impromptu call-and-response routine with SYF. Unfortunately, this kind of session is all too rare for them these days, as the huge buzz that's been generated by their early singles Hungry For The Power and Reckless (With Your Love) has kept them in constant demand in clubs and festivals worldwide. Transcending genres and scenes, their high profile fans range from Annie Mac to Grizzly Bear, Boys Noize to Broken Social Scene. They've collaborated with UK blowups Friendly Fires, as well as done wisely chosen remix work for Robyn, Cut Copy, Booka Shade, Creep (Romy of the XX) and LA's noise darlings Health. There are actually too many remixes to mention, covering ground from wistful, sad ambient-scapes to punkish, chugging techno frenzies. This is not an act that seems to be locked into any restrictive scene, but rather bridge builders between the dance and rock worlds, under and overground sensibilities.