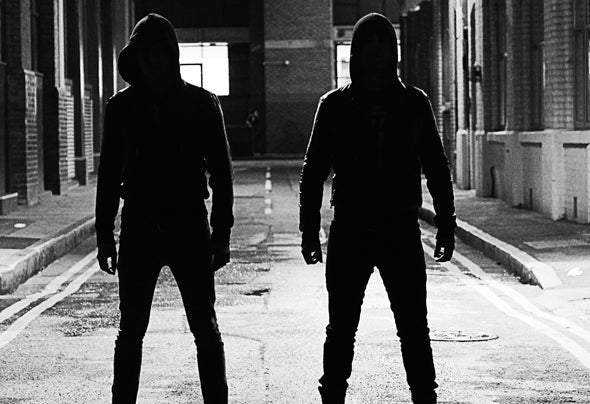 “We just do what we feel like,” said Rob as he marched off stage and straight past me after a sold out and heaving La Machine du Moulin Rouge in Paris. I run up the stairs and round the corner to find him in the green room necking a bottle of vodka while people fight for his attention. Keith walks in behind me to an onslaught of high-fives, affirming salutes, bottles of champagne popping all over the place. I need to do my interview before things get too messy. I drag them into the dressing room, they sit down and peer through their trademark hoods, I catch a glimpse of what’s beneath...“We just do what we feel like, whenever we’re in the studio or on the stage, fuck it.” Since they started making music together in 2006 these guys have been flying with their hearts and fists first and their minds second; rock, electronica, beat manipulation, rave classic covers and creating new tracks on the fly in their performances. “We love playing Paris, they really get it and have shown us huge support from Day 1. It was in Paris that South Central were spotted by The Prodigy and have since toured with them, then Pendulum, and supported the likes of Rage Against The Machine and Vitalic. The past year they’ve been touring constantly, playing their own shows all over the world.“From Prodigy, we learnt about performing, from Pendulum, we learnt about production...then we been putting it all back into what we’re doing”. The latest offering is a free EP, Pitfalls & Corridors. It’s South Central making tracks for the dancefloor and DJ’s alike and they want us all to have them. “These are nothing compared to what we’re working on, you can fucking have them.” I don’t know if I’m scared of what’s coming, or if I can’t wait to see what’s next with these guys that I’m a little bit shaky writing this, or maybe it’s the absinthe...What I do know is I just saw 3,000 people jumping and screaming for an hour straight, there were young people, old people, boys, girls, and a guy in a wheelchair throwing some shapes and running some doughnuts. They’re playing to some big audiences, with some big acts including UKF Bass Culture and Death Disco in Glasgow over the coming months. Watch this space.