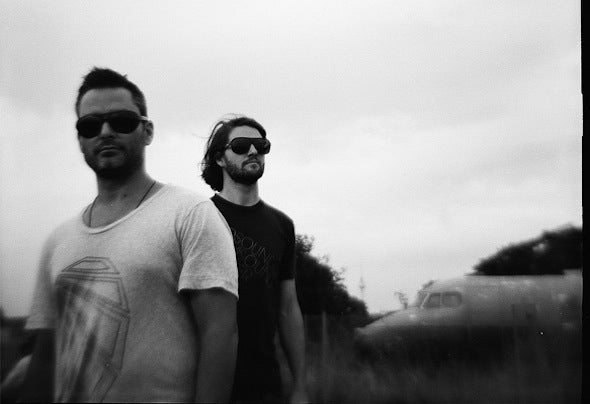 The techno scene is full of people who take themselves very seriously; their music, their perception and their image. The Exercise One duo stand out against this po faced uniformity for their warmth and mischievous manner, with a DIY and DGaF attitude running through their music and electric live performances.This close duo have spent the past 10 years recording and performing live, collaborating, remixing and running two independent labels all their own way. Perhaps it's Marco's early years spent absorbed in goth culture & industrial music that makes him view techno as a vibrant and playful genre, as much as Ingo's double life as the drummer of a Berlin punk band fuels their old school Kreuzberg DIY vibe. What is clear is that they both love what they do and that comes across in every infectious performance and their exuberant records. In their own words they are "driving a car called Techno off a cliff, into the sea of endlesspos s ibilities " .Marco Freivogel and Ingo Gansera met in Berlin while they both worked for !K7 and began to play together, experimenting and producing. But both were seasoned musicians before they met and in a short time their respective backgrounds as live performers combined with the energy of Berlin to create an outfit with an abundance of creativity. This helped to forge their joint musical world-view, that production and live performance have a symbiotic relationship.Building their first studio space in Kreuzberg saw them sharing rooms with musicians like Luciano and Jeremy P Caulfield - an inspiring environment that spawned the synthesised hypnotic and atmospheric sound synonymous with their name. Their latest studio complex with Deadbeat and Jacopo Carreras has been in full effect for 5 years now and built the foundation for their recent work. True to their explorative nature their musical ventures have stepped into more experimental realms and song recordings, yet keeping the production of striking club music for themselves and others at the core of it.Early on they created their own label Lan Muzic (with releases from Donato Dozzy, Peter Van Hoesen and Philip Sherburne) and signed to Anja Schneider's MobileeRecords with their hit 'Debaya'. It was on Mobilee where they released their album 'In Cars We Rust' in 2009, with clubbier material rounded out by enveloping ambient tracks, soundtrack-ready synthesiser ballads and retro-futuristic electro-pop. Being part of the heartbeat of the Berlin music scene since 10 years has lead them to release numerous successful records on the likes of Cocoon, Wagon Repair, Lan, Exone and Dumb-Unit. 2013 is no exception with releases coming on their Exone label up to the Autumn when the duo will celebrate their decade anniversary with a tour and triple vinyl release featuring remixes from some of their close allies over the years.In the last two years, Exercise One completely overhauled their live PA, aiming to return to the root of techno armed with an arsenal of blustering analog machines. The all hardware show premiered at Panorama Bar in early 2012 and followed with selected shows at techno temples like Fuse in Belgium and Tresor in Berlin. It’s a testament to their belief that music and techno should be alive, with their music always guided by the spirit and flow of improvisation, driven forward by the tension of their real time on stage interaction and ability to go “off script” that make their performances more exciting and dynamic than the norm.Exercise One will continue their migration through the hinterland of techno probably for the next 10 years, but unlike most of their contemporaries they'll be doing it with a bank of machines, playful grins and the occasional rabbit costume.