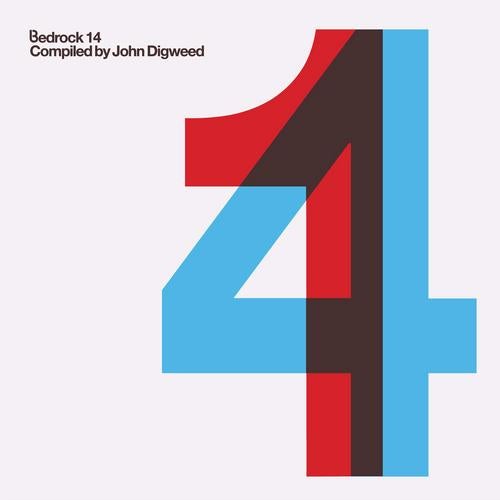 BEDROCK 14 compiled by John Digweed features 21 exclusive tracks from some of Bedrocks favourite artists and some exciting new names on the Bedrock roster, in a DJ-friendly unmixed format. Im really happy with the 21 tracks I have selected for this latest Bedrock compilation. With a mixture of Bedrock favourites and fresh new producers this album shows that Bedrock is always committed to finding the best electronic music out there. - John Digweed The wealth of artists involved for Bedrock 14 is truly amazing. This 2012 label compilation captures the essence of why electronic dance music is such an exciting prospect right now by showcasing amazing underground talent, both established and new. What a dream start to what should be a highly successful career for Eagles & Butterflies. The album opens with the beautifully mellow Kollekt, the first of two debut tracks (the other being the equally adventurous Stimmer) from this new artist. Likewise, Kurtz & Bomber, an exciting collaboration between Troy Kurtz & Panic Bomber (Richard Haig) from Miami, USA debut here with the incredibly infectious vocalized Never Sleeping. John Digweeds ability to draw together an exciting array of international talent into one cohesive whole is pretty much unparalleled. Resistance by Stuttgarts Solee, shows exactly why he crosses divides and spans genres with his distinctive take on evocative melodic techno. Spains Paneoh (who also appeared on Structures 2 and Live In Cordoba) displays all his hyper-energetic twisted brilliance on Vetabom, while one of Australias most talented and sought after music producers, Infusions Jamie Stevens, makes a welcome return to Bedrock (after his exceptional remix of John Digweeds Warung Beach) with Indigo. Rising UK star, Liverpools Jemmy, is given the lush remix treatment on his hypnotic Quarry Bank track by Greeces Stelios Vassiloudis, whose critically acclaimed debut album, It Is What It Is, showed the world that variety is indeed the spice of life. So, its no wonder that Stelios makes three appearances on Bedrock 14, adding his wild acidic grooved Whats That? to the proceedings and teaming up with Florian Kruse and Nils Nurnberg as Wiretappeur for Iridescent, another example of this trios highly original and deep understanding of the power of melody. Bedrocks new talent is in exceptional form throughout. Canadas Maher Daniel teams up NYCs Nikko Gibler for the low-slung, spiralling beauty of Ill Wait For You. Maxime Dangles has grown to be a key new artist in the French avant-garde electronic music community and is creating waves around the globe with his unabashed approach to proper club techno music, so its not surprise that Unsteady Curve is yet another example of his amazing music. Fellow rising French star, Antoine Husson (aka Electric Rescue), brings his distinctive brand of ultra-dynamic techno and sensuality to the party with an exceptional remix of John Digweed & Nick Muirs Raise and his own monster creation, Stucked Ship. Israeli producer Guy J has become one of the most sophisticated and emotive producers in electronic music over the last decade, with a body of work and a sphere of influence that belies relatively short time in the spotlight. With the melody-rich and emotionally charged Mish Mash, he shows exactly why he is one of the most inspirational artists in the world. As are Spains Marc Marzenit and Henry Saiz, whose Sirens Land explains why their complex and emotive form of electronic club music is exciting so many people right now. So much exceptional talent is on display on Bedrock 14 and we havent even mentioned Germanys Robert Babicz, whose music career already spans two decades. The mark of a true musical innovator, he continues to reveal his talent and skill as one of Europe's most essential techno producers here with another stunning creation, Eastside. Then theres another Bedrock favourite, the techno tastemaker Christian Smith with The Judgement, showing exactly why he has operated at the top of his game for over a decade now. The chiming keys of Marco Baileys Whispering Leaves effortlessly lift the proceedings to anthem level and Quivver (aka world-renowned DJ/producer/songwriter John Graham) never fails to impress, Fakes and Bullshit sending out a clear message. If youre talking about exciting underground producers, two of the first names out of anyones hat should always be Igor Tchkotoua and Dan Duncan (aka Pig & Dan) and their intense Crazy is surely a highlight here too. Finally, its fitting that John Digweed and Nick Muir, producers of the finest electronic dance music, bring the show to a close with their Trezz Intro interlude, since between them they have been involved in many pivotal moments in the world of club music over the years and have in many ways helped to define genres & push the boundaries further. With Bedrock 14, the label also shows that it is not resting on past laurels but always moving forward, developing in an exciting direction. So, once again, its hats off to Bedrock for raising the bar even higher with this exceptional compilation featuring 21 exclusive tracks from some of the worlds finest artists. In this day and age to not only survive as an independent label, but also to flourish and constantly evolve, bringing forward new and exciting talent, is something that should be applauded. Anyone with even just a passing interest in quality electronic music needs to think very seriously before leaving this collection on the shelf. Pre-order now for a special signed limited edition slipcase version exclusively at http://www.bedrockmusic.bigcartel.com/