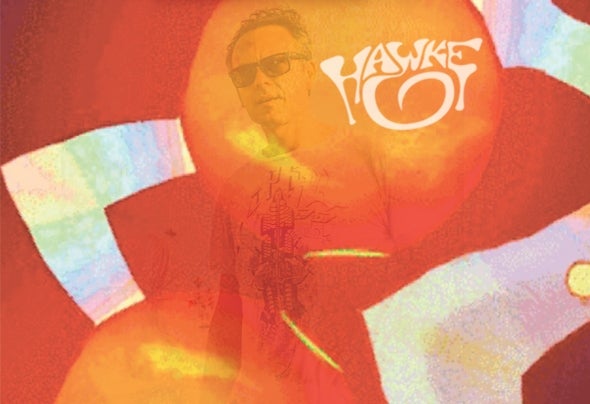 Gavin Hardkiss aka Hawke is a DJ/producer/songwriter who likes pony rides, trips to the moon, castenettes, pirouettes, baby sharks and birds of prey.Gavin started producing music when he moved to San Francisco to start the eponymous record label Hardkiss Music in 1991. Building the Hardkiss label in the early ’90s, he helped foster a new psychedelic dance sound with releases of his own creation as well as releases from Rabbit-in-the-Moon, God Within, Little Wing, T Tauri and Symbiosis.Throughout the ’90s, he traveled relentlessly around the Americas and Europe with his cohorts Robbie and Scott Hardkiss, DJing a hybrid soundtrack of music people had never heard before. A pioneer of the early US rave scene and an innovative producer, he continued releasing singles and remixes on international labels such as Sony Music, Six Degrees, London/FFRR, Astralwerks, Global Underground and Hooj Choons.He also shared A&R duties for the Sunburn label which harnessed a second wave of talented San Francisco inspired artists such as Rebel Crew, Charlotte the Baroness, Drunken Monkey, Lovesky and The Infinite Posse.Gavin has continued a successful international DJ career, jetting out weekends to entertain funky hedonists with his provocative beats and gamma rays. He has traveled the world presenting a hybrid sound of house, tribal techno funk and electronic precipitation.After recording the first Hawke single “3 Nudes In A Purple Garden,” featured on the classic Hardkiss album DELUSIONS OF GRANDEUR, Gavin started to focus on producing albums that strayed from the well beaten paths of genre-centric dance music. At this time, Hawke began to characterize the many collaborations and original sound clashes that he would develope.The Hawke album NAMAQUADISCO was released on Sunburn Recordings in 1998 and HEATSTROKE was released on Six Degrees Records in 2000. LOVE WON ANOTHER. Described by the Orlando Weekly as “thick with the stoned-out, everything’s-cool-man optimis m.”Love Won Another spawned two remix album and several music videos.In October 2009, the newest Hawke album titled “+++” was released.Over the past decade, he has remixed the likes of Youssou N’Dour, Led Z epellin, Elton John and Michael Franti, performed alongside Snoop Dogg and The Buena Vista Social Club and released recordings in Spain, France, Italy, the United Kingdom and the United States. In 2010, the song “Mundo Via Afrika” was featured on the official Sony World Cup album “Hello Africa,” alongside the best of contemporary African musicians.Born in Johannesburg, South Africa, Gavin Hardkiss now makes his home across the Golden Gate Bridge near the city by the Bay.   In 2004, Hawke presented a third original album entitled