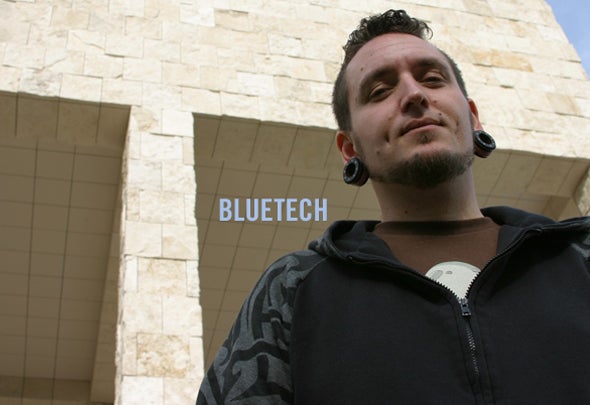 Evan Bluetech has long established himself as one of the leading artists in the downtempo and chillout world. Operating for years out of the west coast of America, and recently moving to Hawaii, Bluetech has been spreading his unique vision of downtempo electronica, combining dubby beats with his distinct spacey atmosphere, and sublime melodies. Classically trained on the piano for public performing, Evan deviated from the traditional structure of classical music and being to relearn the instrument from an energetic and tonal perspective. This resulted in his interpretation of nature's expression of being, establishing a playing style that is dronal ambient, downtempo and improvisational. Explosions in technology and software have enabled him to explore the edges of contemporary music production, and a sound has developed which draws from the psychedelic community as well as the experimental/IDM community. His style fits somewhere snuggly between the two, and has been described as PsyDM (psytelligent dance music) and SpaceHop. Bluetech has behind him already few successful albums and many tracks on compilations from many respected labels around the world. He collaborated with leading artists such as Shulman, Pitch Black & Steve Hillage. He released his latest album- Sines and Singularities with Aleph Zero in December 2005. The album was a huge success, topping the downtempo charts, and receiving amazing reviews world wide and reaching even the pages of the New York Times. Bluetech has established a reputation in North America and around the world during extensive touring for bringing a high energy charge to downtempo music. He already performed extensively all around Europe, The US and Canada, Japan and Mexico, in parties, clubs, artistic venues and all the major festivals. His sets give space for relaxation and movement as well as injecting cosmic funky dub into the dancefloor. Apart from the Bluetech project, Evan has also releases music as Evan Marc (tech-house) and Evan Bartholomew (Neo-classical ambient). He also runs his own labels: Native State (Electronic chillout & IDM), Somnia (electronic, minimalist, modern classical) & Thoughtless Music (tech-house / minimal). He is now working on his new album, expected to be released in Aleph Zero in the end of 2008.