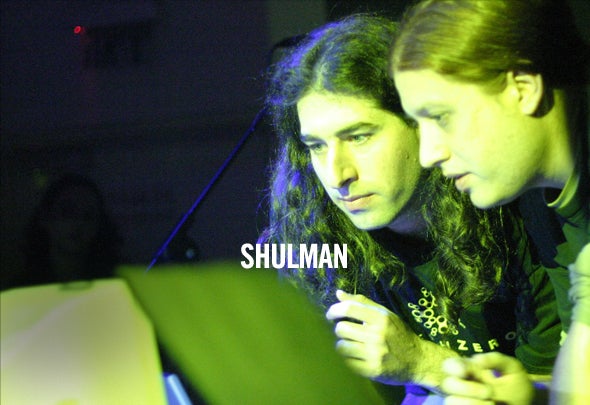 The Shulman project, comprised of Yaniv Shulman and later joined by Omri Harpaz, is considered one of the leading groups in the psychedelic chill out and ambient scene and have performed in large festivals all around the world. Shulman's music is filled with evolving organic layers backed by rich harmonies. Shulman have released 4 artist albums and numerous releases on compilations by leading labels throughout the world. At the moment the guys are busy working on several new projects, and developing their live performance, advancing electronic music live shows to a new level of musical richness and interest. Shulman represents true innovation of psychedelic chill out and ambient and is known for breaking borders and morphing new sounds. Shulman's music is characterized by many ground-breaking sounds and effects, mystical melodies, hypnotic beats, and acoustical instruments, all combined brilliantly creating beautiful harmonies, interesting sonic structures, and deep emotional moments. The duo's debut album, 'Soundscapes and Modern Tales', released in 2002 by Shaffel records, received excellent reviews and world-wide acclaim. It is now world famous for the unique moods it creates, audio-visual alchemy, and storytelling. The second Shulman album, “In Search of a Meaningful Moment” released in 2003 by Aleph Zero records became an instant classic. It has received excellent reviews, expanded Shulman's audience fan base, and has contributed to establishing Shulman as a leading group in the electronic music scene. Shulman's third album entitled “Random Thoughts” released on Aleph Zero records is a special and different experience. As the title hints, it contains different compositions in different tones that accumulated in Shulman's studio independently of any specific album project. Random Thoughts represents diverse and faraway corners of the Shulman mindscape, new sounds, interpretations and sonic surprises, as Shulman stretch the limits of their musical universe of to new and exciting sounds apes. Shulman has collaborated with many artists including world music giants Omar Faruk Tekbilek and Steve Shehan, Bluetech, Ishq, Lee Triffon and many others. In addition Shulman remixed tracks by Omar Faruk Tekbilek and Steve Shehan, Sub6 and Michele Adamson, and Entheogenic. Shulman's tracks were remixed by famous artists such as Bluetech, Ishq, Carbon Based Lifeforms, Anahata and others. Shulman's live show offers a unique musical experience. The show is comprised of a complex fusion of electronic and acoustic instruments and music, of cutting edge musical technologies and traditional instruments playing, of electronic musical structures and World, Rock, Jazz, Reggae genres and more. The live show is usually played by six talented players: Dani Shnaiderman on electric bass, Dekel Dvir on drums, Yonatan Galila on electric guitar and Yakir Ben-Tov on keyboards. Yaniv and Omri are in charge of the computers and synthesis machines. All the material has been rearranged to interestingly fuse and combine both the acoustic and electronic musical worlds. The outcome is an amazing and very musical journey through sound, space, and groove. In addition, Yaniv is managing Aleph Zero (www.aleph-zero.info), a well respected label, with partner Shahar Bar-Itzhak (aka DJ Shahar). Aleph Zero was created with a vision of releasing and promoting high quality downbeat electronic music, journeying through the realms of ambient, chill out, ethnic sounds and weird electronica. Yaniv Shulman is from Israel. He has a computer science BS with DSP and math emphasis, and studies music theory at the moment. Yaniv has produced music for the last 11 years. He is focused mainly on downbeat electronic music of all sorts, but has also worked on electronic music such as dance floor oriented music, trip hop projects, rock, and more. Being a talented and successful sound technician, he has worked on other aspects of musical creation such as running his own mastering studio and working as a recording engineer and assistant producer in Israel's largest recording studio. Yaniv grew up surrounded by music and started out by playing the organ when he was a child and then later played different musical instruments. When he was a teenager, he played the guitar in a couple of hardcore and death metal bands. After that, he delved into drumming. In the last couple of years, he's been learning to play the piano. Yaniv is inspired by a varied array of music, from the modern composers such as Rahmaninov and Ravel through rock, ethnic, and all kinds of electronic music. Some of his favorite artists include: FSOL, Pink Floyd, TIP, Hallucinogen, Bjork, Anti Pop Consortium, Messhuggah, and many more. Music with strong atmosphere, endless space, and emotional harmonies is what Yaniv likes best and he works to incorporate these elements into his music and production. Omri Harpaz (Omi), is a 30 year old from Israel, who studied computer programming. Omi started DJing when he was 17 and has since played all over the world (Japan, Mexico, Kenya, Holland, Germany, Portugal, The USA, Brazil and more). In the last few years, Omi started producing music. He started off with his project 'Digital Manta' which was more progressive oriented, but after a while he decided to transition to the more full on side of trance and began his new project called '40%'. Omi's music is dance floor oriented and aims to get the crowds up and dancing. For the past four years, Omi has joined 'Shulman' producing chillout music and performing all over the world. Omi has collaborated with many other known artists in the trance scene as well. Omi is influenced by many types of music from hardcore heavy metal through punk, modern rock, gothic, industrial, hip-hop, and trip hop. His favorite artists are: Pantera, Metallica, Linkin Park, System of a Dawn, Eminem, My Dying Bride, Marilyn Manson, Nine Inch Nails, Rob Zombie, Dr. Dre, and many more.