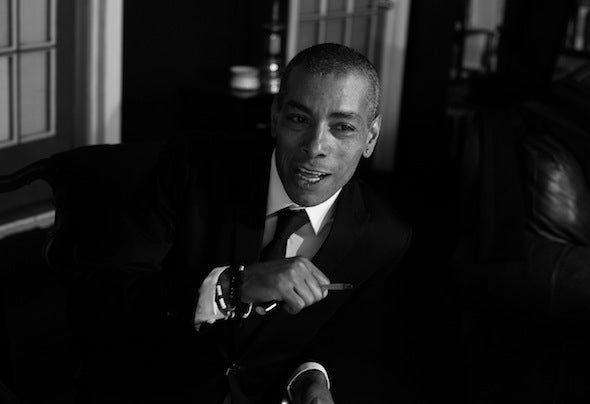 A part of the very fabric of the UK techno scene, Dave Angel’s status as an erudite for electronic culture is anything but hyperbole or smothered in exhausting superlatives, but cemented in facts and encased in the endless memories of those who have lived, loved and danced, to the astonishing output of music he has created over the years.Born the son of a Jazz musician and elder brother to British hip-hop artist Monie Love, Dave’s path in music came to the fore during the explosion of acid house in London, back in the late 80’s. Hosting one of the zeitgeist shows of its time, his weekly broadcast on pirate radio station Phaze One (alongside Fabio and Groverider), saw him champion a new sound that was gradually captivating the youth of the country and catapulted him into the media spotlight, with notable publications including Mixmag, DJ Magazine and The Guardian; all proclaiming Dave as a one of the major forces in the UK techno/acid house scene.DJing professionally formed through a natural development prior to the recording process, as in 1989 after tinkering at home with a basic set-up of a keyboard and two tape decks, his first attempts at production created a somewhat controversial ‘Nightmare Mix’ edit of Eurhythmics ‘Sweet Dreams’. Initially a funk DJ, the TB-303 changed his life: "When I got into techno and acid it was like ‘this is the new sound, this is the new technology!’", says Dave. "I was thinking: ‘this is the music of the youth, and 20 years from now it’s going to be like the rock of the sixties!’- I had to get in on it”.Angel’s reworking of ‘Sweet Dreams’ generated such reaction at club level, that RCA were forced to officially release the track; which went on to debut at #23 in the UK Singles chart. The track’s success launched Angel’s name on a national level and opened his possibilities to a wide selection of creative opportunities. Most notably are his EP’s ‘The Family’ on Apollo, ‘Royal Techno’ on Rotation Records and his classic ‘Sea’s Of Tranquillity’ EP, hailed as a landmark release by the techno intelligence. Since this initial success Dave has not lost his drive to create music which continues to be regarded as some of the bravest and most influential electronic music Britain produces. Often turning up to his early sets armed with a screwdriver in order to tear apart his Technic 1210s, by abolishing conventional BPM’s his sound has managed to pioneer, whilst still retaining classic inspirations. Heavily influenced by the Detroit sound, Dave’s back catalogue is punctured with singles, EPs and remixes on some of music’s most reputable record labels that include Polydor/Love, OuterRythum, Fnac, React Records, Island, R+S and Outrage imprints, amassing impressive sales units and critical acclaim during his 20+ years as a producer.As a remixer, he has been invited by some of electronic music’s most revered artists and acts to apply his artistic trade to their music. These include Orbital, Sun Electric, Carl Cox, Spooky, James, Roni Size and Underworld. One of his most highly-acclaimed remix duties includes Juan Atkins’s Model 500 alter-ego, where he skewed the sparkling “I Wanna Be There” into a broodingly weighty offering. Equally propelling him further onto the conscious radars of techno impressionists whom matter, Carl Craig’s Drums Suck Mix of ‘Airborne’ taken from the Handle With Care EP, was met with mass praise from fans and critics alike, revealing itself as a twelve-minute expedition of definitive, elastic electronica. The formation of his renowned recording imprint Rotation Records not only allowed Dave to create some of his most exquisite work to date but also gave the earliest platform to some of the biggest names in the scene today. Artists such as Adam Beyer, Christian Smith, Deetron, Vince Watson, Laidback Luke, The Advent, Jamie Anderson, Bryan Zentz, Steve Rachmad and Misstress Barbara among many, all cut their earliest grooves on the label and each helped to define Rotation as both a purveyor for fresh sounds and emerging talent.More recently, Dave was back on Bedrock Records in 2014 with the highly regarded triple header ‘Voodoo EP’, which went on to score a Beatport Top 20 and strong support from a host of big hitters including Pete Tong, who spun it on his BBC Radio 1 show exclaiming “The return of Dave Angel” along with Eats Everything quoting “Dave Angel is one of my heroes and this is massive!!” and of course Bedrock head honcho John Digweed amongst many others. With further output due on London based Anjunadeep alongside the Dusky boys this summer and a Vinyl EP due for release on Los Angeles based Halocyan Records later in the year, Dave’s reputation for consistency is as strong as ever and that means plenty more to come for 2014 and beyond.As has long been attested by the scenes biggest names and continually backed up by his constant slew of robust dancefloor gems, Dave Angel remains one of the electronic community’s true characters, whose industrious approach to his craft gives off an aura of positivity like no other, a kind of warmth that you cannot fail to feel through his exceptionally, uplifting music.